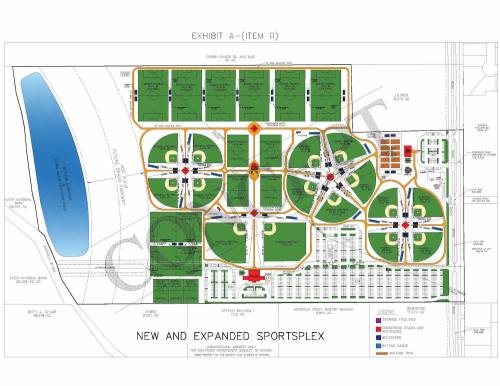 The new sportsplex will be bigger than the existing one.

An agreement has not been signed to turn the Chester L. Davis Sportsplex into an entertainment hub, but the city is planning to construct a new sportsplex before a deal is signed, and some residents at a public board meeting said they recognize the need.

Almost one year ago, the city and Western Spherical Developers signed a predevelopment agreement to turn the site of the sportsplex along I-45 into Epicenter League City, which would include a convention center, amphitheater, arenas for professional sports, hotels, restaurants and more. League City officials called the deal “epic,” saying the city would get not only an entertainment district to attract visitors, but the developer would also create a new, bigger sportsplex south of the existing one—all without costing taxpayers a thing.

A final agreement is still pending, but city staff said they recognize the immediate need for a new sportsplex because the existing one is overcrowded, and teams are turned away for a lack of available space. League City’s 4B Corporation Board, which determines how to allocate certain local sales tax dollars toward amateur sports facilities, has set aside $1.5 million to fund the planning and design work for Phase 1 of the new sportsplex, Bay Colony Park, as well as up to $6.8 million for the construction of four baseball fields, a parking lot and a maintenance facility for fiscal year 2020-21. The city will also apply for a Texas Parks and Wildlife Department grant to help fund the new facility.

Residents at the 4B Corporation Board meeting Oct. 7 seemed supportive of the idea, noting the growing city needs more sports fields sooner than later.

Resident Chuck DiFalco said it is not necessarily a good use of taxpayer dollars to build more fields for teams to only practice. Officials said the new fields would be used for practice and competitive games.

Mayor Pat Hallisey said Epicenter League City would not be built over the existing sportsplex unless the developer paid about $35 million to fund Bay Colony Park. Right now, the developers are interested in building around the existing sportsplex without disrupting its operations, meaning it and Bay Colony Park would operate concurrently, he said.

At this point, it is unclear if the Epicenter development will even happen as Western Spherical Developers has not acquired the capital necessary to build the new sportsplex, Hallisey said.

“I don’t know if the Epicenter is gonna make it or not,” he said.

When it became more apparent Epicenter might not be built, City Manager John Baumgartner recommended the city build the new sportsplex anyway with 4B funds, which can be used only to build amateur sports facilities, Hallisey said.

Future phases and the timeline of construction are to be determined. The total number of proposed baseball fields for the new sportsplex is 15 compared to the 10 at the existing sportsplex.