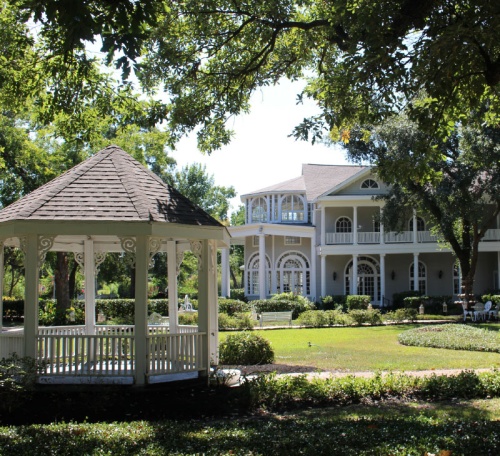 Nestled off Hwy. 90A in Missouri City, Heaven on Earth wedding and event venue has the capacity to host over 100 events annually.

“The entire roofline was torn apart,” owner and event planner Tamara Vogt said. “I had extensive damage, especially in the ballroom. Really, in the whole house there was only about three to four rooms that there was not some form of Harvey damage.”

The weekend Harvey hit was Vogt’s only weekend off until January 2018, she said. So she had her work carved out for her in the months ahead, relocating about 65 clients.

For the first seven couples set to be married in the aftermath of Harvey, Vogt personally delivered care packages with roses, steakhouse gift cards, couples massage certificates and a one-night hotel stay. She also drove to each client with the venue’s staff reverend to marry the couples, she said.

“All of those first seven brides had already paid for the marriage licenses,” she said. “Their invitations and RSVPs were practically all out and back. But more importantly, their honeymoons were paid for.”

After traveling to remotely marry the couples post-Harvey, Vogt still ensured they had their dream weddings at the venue when it reopened.

“Driving to all of them, there you saw all of the devastation of Harvey throughout Houston,” she said. “It was not what anybody had anticipated or expected, and there were a lot of sorrowful long faces on what is to be the most special day of their life.”

Coming from the customer service and restaurant industry, Vogt took over the venue in early 2013 from Hugh and Susan Douglas, for whom the street the venue is on is named. Nestled behind tall oak trees, portions of Heaven on Earth were built in the late 1800s, and a chapel and formal ballroom have been added on since the space became a wedding venue in the 1970s, Vogt said.

“Hugh purchased [for Susan] this dwelling for a wedding gift,” she said. “She is the one that took one look at it and said, ‘Oh, my goodness, this is heaven on earth.’”

Vogt has her own love story surrounding the venue: After having a long-term relationship with her now-husband, the two celebrated their marriage at Heaven on Earth on Jan. 1, 2016. Before they tied the knot, Vogt’s husband built them a home across the street from the venue, she said.

Heaven on Earth offers more than wedding events. From holiday parties to engagement parties to graduation parties, Vogt takes on a variety of clients. April and October tend to be the busiest months for weddings, Vogt said, and the venue will typically have one event per day in December during the holiday season.

Vogt also helps clients plan their events every step of the way.

“I feel very privileged to be part of that moment in so many people’s lives,” she said. “I’m going to do as much for them on that day as I would if they were my own family.”