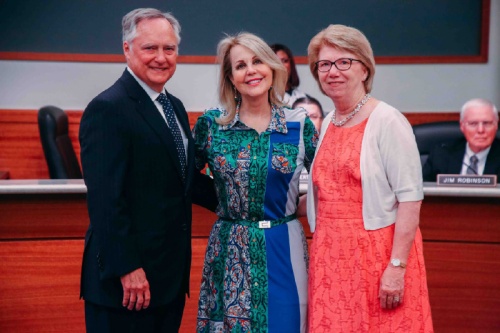 From left, Robert Fry stands with Carrin Patman and Jo Ann Fry after his June 27 appointment.

Robert Fry, former mayor of West University Place, was formally appointed June 27 to the board of directors of the Metropolitan Transit Authority of Harris County.

Fry fills the seat vacated by Cindy Siegel, who announced a congressional campaign in April. He will represent the group of 14 smaller cities in METRO’s service area.

“I’m thankful to mayors of the 14 smaller cities and to the METRO board for their confidence in me. I look forward to working closely with fellow board members and staff as METRO meets the transportation needs of our growing region,” Fry said in a news release.

His term at METRO will last two years, and members can serve up to eight years total.

The board is expected to ask voters in November to allow the agency to borrow up to $3 billion to help cover the estimated $7.5 billion cost of the new METRONext Moving Forward Plan, which includes improvements throughout the transit system. The agency is not asking for a tax increase.
SHARE THIS STORY