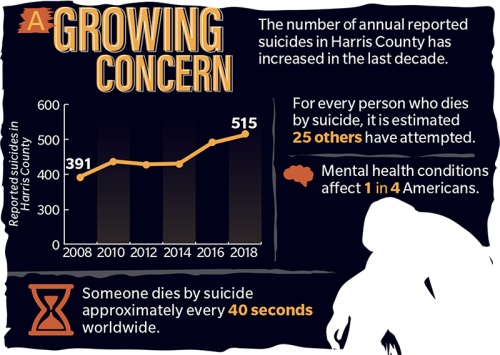 Cy-Fair resident Sarah Henderson attempted suicide for the first time when she was 15.

After growing up in an abusive environment, she said she resorted to self-harming, eating disorders and ultimately attempting suicide because she felt she had no other option to escape the trauma.

“I’ve heard people say it’s a selfish or cowardly act and, ‘They’re just transferring the pain to their families,’” she said. “There are some really unfortunate assumptions about suicide. I wish there was more compassion around it.”

Henderson, who raises awareness with groups such as the American Foundation for Suicide Prevention, said she has survived multiple suicide attempts and also lost family members and friends to suicide.

In Harris County, there were 515 reported suicides last year—up 13.2% from the 455 suicides a decade earlier in 2008, according to the Harris County Institute of Forensic Sciences.

Brandon Towle, a board member for the AFSP’s Southeast Texas Chapter, said for every reported death by suicide, there are an estimated 25 suicide attempts. He said the fast pace of living and working in Houston as well as fluctuations in the local economy could tie into the increase in suicides.

“Whether you have a dual- or single-income family, one is likely going to have long commutes, so they’re losing a couple hours out of their family life,” he said. “A lot of families live in fear of losing their job. Most organizations think their employees are lucky to have a job, so they don’t necessarily invest in them.”

According to the AFSP, some individuals are more at risk for suicide than others—including those with mental health conditions, chronic pain and stressful life events.

Stress for students comes in many forms, CFISD Director of Psychological Services Traci Schluter said. Students face stress when it comes to academic performance, applying for college and seeking acceptance from peers.

Social media has magnified these pressures, Schluter said, and outside of school, family relationships and finances can also be overwhelming.

“Some of the more common [misconceptions] expressed by parents and school staff include: ‘They’re just looking for attention,’ ‘They’re just going through a phase,’ and ‘I was the same way when I was a kid, and I turned out just fine,’” she said.

In response to the growing concern, CFISD launched a Mental Health Intervention Team—made up of two licensed psychologists, four licensed professional counselors and two mental health officers—at the start of the 2018-19 school year.

Alissa Sughrue, policy coordinator for the National Alliance on Mental Illness in Texas, said state lawmakers passed several bills regarding mental health in public schools during the 86th legislative session. This included House Bill 18, which increases training for employees and mental health education for students, and Senate Bill 11, which allots funding for districts to use for mental health resources and suicide prevention strategies.

The pressures students face typically do not diminish by college, said Caroline Ferguson, the founder of Grateful & Company. Proceeds from the 22-year-old’s local business support suicide prevention programs, therapists and campus workshops with the goal of eliminating suicides on college campuses.

After losing her father to suicide at age 9, the University of Houston graduate said she also lost a friend to suicide while in school.

A 2017 report from the Substance Abuse and Mental Health Services Administration found that 10.5% of individuals between the ages of 18-25 had suicidal thoughts in the last year—compared to 4.3% of adults ages 26-49.

“Depression [doesn’t care about] your age, your identity, who you are, where you came from, where you’re going,” Ferguson said. “It has no limit, it has no boundary. We all are capable of falling apart.”

With the annual reported suicides in Harris County outpacing the county’s 15% population growth from 2010-18, law enforcement agencies and mental health specialists are working to bolster the mental health system.

Frank Webb, the project manager of Harris County’s Bureau of Mental Health and Jail Diversion, said the county has a Crisis Intervention Response Team and a Homeless Outreach Team to help connect suicidal individuals with assistance.

The county’s telepsychiatry program enables officers to access clinicians via iPads when encountering someone believed to be mentally ill. While training has also ramped up for law enforcement, Webb said officers generally are not adequately equipped to deal with individuals with mental health issues.

“We need more mental health resources,” he said. “Unfortunately, every law enforcement agency that I’m aware of—their numbers of responses to people with mental health issues and in crisis are going up … and the resources have gone down.”

When a loved one exhibits signs of suicidal thoughts, Spencer said being deliberate in letting them know they are not alone is key.

“They don’t feel like they’re worthy of help, and so they’re not going to bother you with their problems,” she said. “That’s generally why people do commit suicide—because they don’t want to be a burden.”

After 22 years in her field, Spencer said many barriers around mental health care access have come down. For instance, telehealth has allowed busy clients to have therapy sessions via phone or video call during their lunch breaks while at work.

“There is a misconception that if you have anxiety or depression at all it’s a problem, but sometimes that’s a natural reaction to certain events,” Spencer said. “It’s when it disrupts your life that it becomes a problem.”

Sughrue said the state currently does not fund any suicide prevention programming, although multiple attempts were made to change that earlier this year.

HB 2693 proposed establishing a grant program to fund community-based suicide prevention initiatives, but it did not pass. An amendment to HB 1 also would have created a

$2 million grant for these purposes, but the Senate ultimately elected to remove the amendment, Sughrue said.

Henderson said even in a metropolitan area such as Houston, there are never enough resources or funding for mental health care.

Conditions such as depression, anxiety, schizophrenia, post-traumatic stress disorder and addictions are ubiquitous in Cy-Fair and in any community, she said.

“Suicide is something we need to talk about,” Henderson said.  “Not talking about it doesn’t mean it’s not happening, and pretending it’s not there doesn’t help.”

Editor's note: A previous version of this story inaccurately reported Harris County saw 391 suicides in 2008. The story has been updated to reflect there were 455 suicides in Harris County in 2008, according to the Harris County Institute of Forensic Sciences.
SHARE THIS STORY