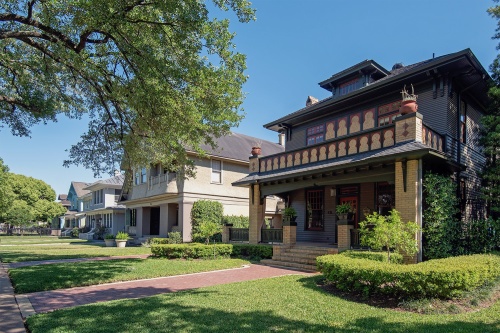 A home on Avondale Street in one of Houston's historic districts shows the architecture unique to the area.

The First District Court of Appeals ruled in favor of Houston's historic preservation ordinance June 25, backing a trial court decision over whether the law violated the city's charter against zoning.

"It's a relief," said David Bush, executive director of Preservation Houston, a private nonprofit that advocates for historic preservation efforts. "It could have had a significant impact on the historic districts."

The ordinance, adopted in 1995, allowed for the creation of historic districts, which requires property owners to file for certificates of appropriateness before tearing down, modifying or developing property in its boundaries.

Homeowners in Heights East, one of the city's largest historic districts, filed suit in 2014 to have the ordinance tossed out, saying that it constituted a form of zoning, which Houston lacks. There are about 20 such districts in Houston, which, according to evidence cited in the court ruling, comprise just over 1% of property in the city.

"The other thing to remember is, when the Heights historic districts were created, a majority of property owners approved it. In other cities, the city just says, 'Oh, this is a historic district,' and there's a process from there," Bush said.

Part of the decision hinged on the fact that the ordinance only applied to the visual character and construction of the buildings in a district, but did not regulate the use of the buildings, which would have made it more like zoning. The court maintained that cities have the right to allow such protections.

“This decision reaffirms the City’s rights as a home-rule city to protect its precious heritage,” Mayor Sylvester Turner said in release.

A copy of the ruling can be accessed below: