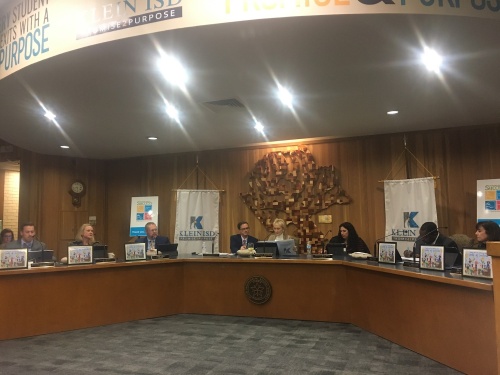 The Klein ISD board of trustees discusses updates to the Community Conversations series, the new Klein Leadership Coalition and the possibility of a tax ratification election at the Jan. 14 meeting.

Klein ISD kicked off a Community Conversations series led by Superintendent Bret Champion last September to foster dialogue between stakeholders in the community and the school district and to provide an opportunity for citizens to express concerns and ask questions.

The initiative tallied 89 conversations at different locations by December, including schools, apartments, restaurants and residents’ homes, Champion said at the Jan. 14 board of trustees meeting.

Several themes have emerged from these conversations, including retaining top talent, strengthening communication, advocating for school finance reform in the state Legislature and studying the need for a future tax ratification election, or TRE, he said.

“Klein [ISD] has been and continues to be top-tier,” Champion said, adding that in order to maintain the district’s status, retaining employees is critical. “In this upcoming budget we need to work to bring our salaries and our benefits to market [rate].”

Strengthening external communication by reducing ambiguity was another topic that emerged during the community discussions, he said. For instance, some community members said they had misunderstood last year’s TRE to be a bond election, he said.

“One of the most important ways to keep a culture strong is to ensure that people are clear on messaging,” he said.

As part of this effort, the Klein Leadership Coalition, which kicked off this month, was created to develop a large group of internal and external influencers who are equipped to share information about the district with other shareholders, Champion said. The coalition includes parents, community members and businesses and, as of Jan. 14, has 250 members.

“They will share good news as well as have awareness on how Klein [ISD] operates and what kind of legislation affects the district,” he said.

Advocating for the school’s legislative priorities—namely increasing funding—was also discussed in the meetings.

“Our financial constraints are tied to the decreased state funding, and our community strongly states that we need to continue working closely with ... elected officials to, frankly, just get more money to public schools,” Champion said.

Officials with KISD are communicating regularly with legislators and working to strengthen those relationships through regular informal visits, Champion said. The district is also encouraging the community to advocate for more public school finance and is working on a public tool kit for this purpose.

If the Legislature does not take action in a way that has a positive effect for KISD’s finance, the district “will need to think about” holding another TRE, Champion said. If an election were to occur, it would likely be held in November, he said, as feedback from Community Conversations suggests residents prefer a uniform election date.

In other news, the board also approved amendments to the general fund revenue budget, which included increasing the budget for the replacement of KISD musical instruments by $15,440. The instruments were damaged in a vehicle accident while in transit from Cain High School to Lemm Elementary School, KISD Chief Financial Officer Dan Schaefer said.
SHARE THIS STORY