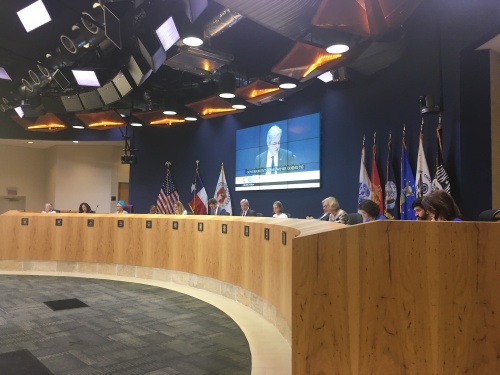 Austin City Council voted 10-1 to discourage future contracts and encourage the cancellation of current contracts with all organizations involved with separating families at the U.S.-Mexico border.

A city-funded program that has supported the East Austin Hispanic art community for 10 years could be in trouble after Austin City Council voted 10-1 Thursday to discourage future, and potentially cancel current, city contracts with organizations involved with family separations at the U.S.-Mexico border.

The resolution brought by District 3 Council Member Sabino “Pio” Renteria directs the city manager to develop a method of ensuring the city of Austin does not do business with organizations “whose activities result in the separation of immigrant children from their [parents] and/or siblings.” District 8 Council Member Ellen Troxclair was the lone dissenter.

The action responds directly to the controversial former practice by the Trump Administration of detaining separately parents and children who attempted to cross the U.S.-Mexico border illegally.

The resolution includes a recommendation from the city’s Hispanic/Latino Quality of Life Resource Advisory Commission to cancel all such current contracts as well. This, according to discussion at the commission meeting, was directed at a city contract with Southwest Key, a national nonprofit that works with the federal government to shelter immigrant children unaccompanied by, and separated from, their parents at the Mexico border. Headquartered in Austin, Southwest Key's programs focus on youth justice, immigrant children shelters, education and community building.

Since 2008, Southwest Key has also contracted with Austin to run the Latino Arts Preservation Program. In response to expressed need from the East Austin community, the nonprofit's program aims to teach, perform and circulate local Hispanic cultural arts across Austin. The program offers opportunities in bilingual theater, Mariachi and Folkorico. Austin pays Southwest Key $15,000 per year to run the program.

Carmen Llanes, vice chair of the Hispanic quality of life commission, said the “symbolic denouncement” was not fully supported by the commissioners.

“In no way do I support [family separations],” Llanes said. “We should be trying to advance the well being and quality of life of Latinos in East Austin. But does this vote actually help our people or are we doing this for political reasons?”

For the last roughly 20 years, Southwest Key has contracted with the federal government to shelter unaccompanied minors who have illegally crossed the U.S.-Mexico border, including those taken by U.S. Immigration and Customs Enforcement agents under the Trump Administration’s zero-tolerance immigration policy.

Recently, the organization has come under heat as many claim their service directly involves them with family separations. Groups have called for boycotts and the cancelation of all ties with Southwest Key. Earlier this month, Travis County Commissioners Court, amid heated protests, voted unanimously to renew its contract with Southwest Key for prevention and intervention services for at-risk youth.

Jeff Eller, spokesperson for Southwest Key, said the organization’s work at the border has not changed since it began roughly 20 years ago. Eller said Southwest Key does not believe the resolution would impact their Latino arts program.

“We think it would be very hard to draw a line from A to B from that resolution to us being funded by the city for arts programs because we do not separate families in any form or fashion,” Eller said. “We look forward to talking with the city manager about the compassionate child care we provide to unaccompanied immigrant children after they are detained at the border. We do not separate families and oppose any family separation policy.”