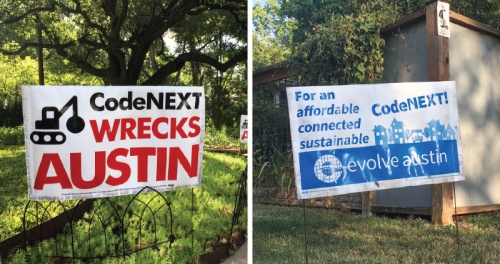 After killing CodeNEXT, Austin City Council passed the buck to City Manager Spencer Cronk to carve a new path. While some residents opposed CodeNEXT, others saw it as a way to have a more connected and sustainable city.

Austinites have agreed the city’s restrictive and outdated land development code has played a role in the growing affordability and housing crisis, and there is general consensus that change is needed.

However, the status quo is destined to remain for at least several months—potentially much longer—following Austin City Council’s Aug. 9 decision to kill CodeNEXT, the city’s more than five-year, $8.5 million effort to overhaul the land use code for the first time in more than 30 years.

Over the last few years CodeNEXT became the city’s dividing political topic. In his initial call to cut the project short on Aug. 1, Austin Mayor Steve Adler said the process became poisoned with hyperbole and misinformation. City Council agreed to task new city manager Spencer Cronk with carving a new path forward to fix the code, and Cronk has committed to at least updating council on his progress by early 2019, although he would not give an exact date.

Since the CodeNEXT project began in 2013, the median value of a home in Austin has increased 86 percent, according to city numbers. The skyrocketing property taxes have displaced residents in many of Austin’s neighborhoods. Although factions on both sides of the debate ultimately agreed with the decision to bury CodeNEXT, many acknowledged remaining in the status quo is not in the city’s best interest.

“The cost of killing CodeNEXT is not the $8.5 million paid to the consultants; the cost is people getting displaced,” said Scott Turner, an infill developer and spokesperson for Evolve Austin, a group that advocates for more housing density throughout the city.  “The problems are not going away until the land development code is changed.”

Bouldin Creek, a neighborhood  just south of downtown once known for its bungalows, has suffered some of the most intense change over the last six years. Median home prices have more than doubled since 2011 and much of its older housing stock has been bulldozed.

Yet Corey Walton, the former president of the Bouldin Creek Neighborhood Association, said the status quo works better than what CodeNEXT offered. He said increasing the density entitlements of neighborhood lots would immediately increase property values. As property values rise, Walton said the neighborhood’s older homes would stand no chance.

“Already under the current code, property values are so high that the sale of any original home will more than likely result in a demolition,” Walton said. “Central Austin neighborhoods are relieved this process is over. The question now is who will run the process moving forward and who is going to be at the table.”

Greg Guernsey is the director of Austin’s planning and zoning department and head city staffer throughout the CodeNEXT process. He said although the project is over, the need for a new code remains and the principles at the foundation of CodeNEXT—among others, the need for compact and connected development, more housing and enhanced mobility—will continue to guide the city’s land use philosophy.

Frank Harren, a vocal proponent for increased housing density and a representative of the Tarrytown Neighborhood Association, said at the time of its demise CodeNEXT was already watered down and would not have had much impact. Harren said he is not holding out hope for the future.

“I think Austin is doomed unless something unforeseeable happens and there is a dramatic shift in the political influences that guide City Council,” Harren said. “As they say, ‘If you keep you doing the same thing and expect different results, that’s insanity.’”