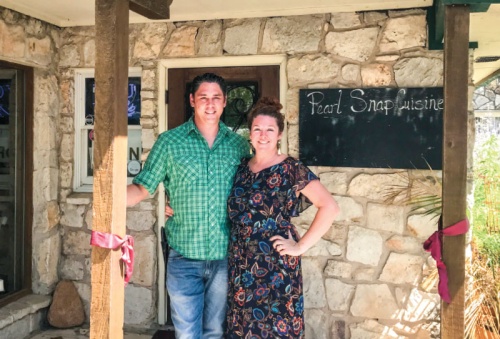 Jackson and Alicia Bolton stand outside of Pearl Snap Cuisine.

When Jackson and Alicia Bolton met dancing at the Dallas Night Club in Austin, they immediately connected over a shared interest — both were dedicated chefs. That weekend Jackson had his first solo catering job for a local wedding, and Alicia immediately agreed to help out.

“We’re very farm-to-table,” Alicia said. “And we’re very hands-on. We really want to keep an intimate relationship with our customers, and we’re very focused on getting to know them and letting them get to know us and our personalities, too.”

That personality carried right over into the name they eventually settled on for their growing business.

“The advice early on was to name the business after my name,” Jackson said, “so at first it was ‘Chef Jackson’s Catering.’”

“It was totally wrong for us,” Alicia said.

French-inspired "cuisine" entered in. Jackson trained at the former Le Cordon Bleu Academy in Austin before working for highly lauded restaurants such as Uchi and The Driskill. "Pearl Snap Cuisine" was a perfect fit.

“As soon as I thought of it, I headed straight for the tax office to change the name,” Jackson said. “It was a really natural transition."

It all goes back to what Jackson cites as Pearl Snaps' guiding philosophy: “Whatever you think of when you think of boring catering, we want to do the complete opposite.”