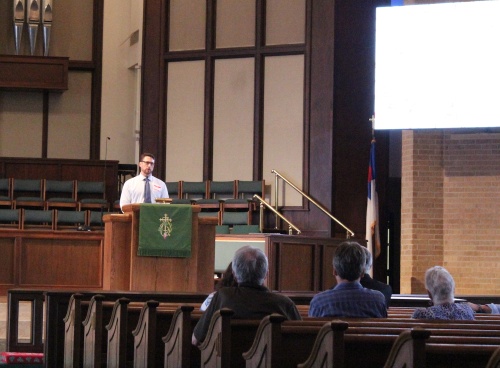 Representing the Harris County Flood Control District, Matthew Zeve was one of several speakers at a flood seminar in Spring Aug. 15.

The HCFCD currently allocates the other half of its annual $120 million budget for operations and maintenance, he said. If voters approve the bond, the department will also triple its maintenance activities.

“We have a three-year backlog of maintenance we need to do across the county,” Zeve said.

Under the expanded budget, HCFCD would need to add more positions and modify its organizational structure, he said. The department is working in concert with Harris County Engineering Department, which would be involved in several of the HCFCD projects, to identify what positions are needed.

“On Aug. 28—we are assuming the bond passes—we will have a call for new positions to be created,” Zeve said.

The majority of work would be handled by private consultants, he added.

At the panel session, Zeve also addressed citizen concerns over the bond projects, including the lack of details on how they will be implemented. The general descriptions, he said, are key to accommodating unforeseen changes in the future.

Citizens have also voiced their discontent with what appears to be a lack of progress by the HCFCD, he said.

“I’ve heard a lot of people say the flood control district doesn’t do anything for me,” he said. “A lot of our projects are back in the bayous and creeks where a lot of people don’t go and they don’t see us. But I can assure you, we spend millions of dollars on Cypress Creek Watershed every year.”

For more information on the bond referendum, see our guide.