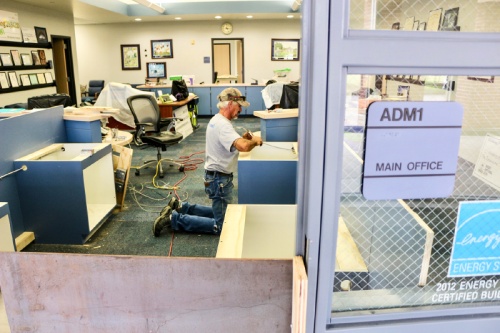 Friendswood ISD is improving security vestibules at Windsong Elementary school as well as other schools in the district. Construction is slated to be finished by the start of school.

By the time students return to classes this month, Alvin, Pearland and Friendswood ISDs will have added safety improvements that have been in the works—in some cases for years—but have taken on added emphasis in the months following the Sante Fe school shooting in May.

Updates this year include more personnel and infrastructure improvements. But one of the most important changes will be a shift in campus culture, said Erich Kreiter, FISD executive director of safety and operations.

Parents are concerned about which procedures schools will choose to implement, and they know that building safer schools will take time.

“My big concern is this is going to be an ongoing process, because I don’t think anything is going to fix it all. As soon as we put something in place, if someone has ill intentions, they are going to work around it and we are going to have to come up with the next step,” FISD parent Kelly Montalvo said.

The Senate Select Safety Committee is recommending the state consider legislation enhancing school safety, as well as funding for infrastructure.

“The main concern is, nobody wants to be the next school. So, they are trying to do every reasonable thing they can do to try to prevent that from happening at their school,” said state Sen. Larry Taylor, R-Friendswood, who chaired the committee.

For AISD, changes include potentially adding more security officers and increasing training for teachers and staff, as well as using standardized language for threats, so that when a substitute teacher comes to a new district, a threat is explained the same way as it is at other districts and on a state level.

AISD is also looking into implementing an alert system to allow the district to broadcast threat information on campus more effectively, as well as a way to monitor social media, Gesch said.

FISD will monitor social media this upcoming school year, officials said. The district is also increasing training for staff and students as well as renovating safety vestibules, which will be completed before students start school. The renovations will cost less than $20,000.

“You need to hit it immediately because you don’t know when the emergency will take place,” Kreiter said at a July 26 district town hall.

FISD will add law enforcement officers and will look into adding a school marshal, which is a volunteer administrator carrying a concealed weapon on campus. This idea has raised questions for parents, FISD Superintendent Thad Roher said.

“I’m not a big fan of the marshal program,” Montalvo said. “Having guns on campus ... is just a recipe for disaster.”

The district had two security officers on campuses in past years, and the board of trustees approved two more for the district in June.

PISD is also considering adding safety monitors, contracted by the school district from a private company. PISD already has 11 Pearland police officers stationed throughout the district.

“You have to do a number of things. No one thing is going to work because you don’t know what is going to happen. So, it’s just trying to do as much as you can in all the different threat areas,” said Don Tillis, PISD’s director of facilities and planning.

School officials said they are striving for a balance between safety and campus culture.

“We all want to focus on teaching and learning and the joy of that and the satisfaction of that,” Roher said.

Roher said one of the hardest challenges the district faces in terms of safety is this is “the new normal.”

“All of us feel a tremendous burden for the safety of our students, our staff, our community. So many layers are in place, so much work can be done, and someone can still target a school,” Roher said.

Kreiter thinks one of the biggest challenges FISD faces is older buildings, built before safety regulations were as rigorous as they are now.

“We want to keep our kids safe and that’s a priority—but our core business is to provide quality education to our students and the taxpayers and the stakeholders of Alvin ISD,” Gesch said. “Trying to keep that balance and meet the needs of our core business while trying to keep all of them safe and secure is a constant challenge, but it is one that we have to fulfill.”

Safety is being addressed at the state level as well. The Senate Select Safety Committee issued its report Aug. 6 with recommendations for infrastructure, personnel, mental health and legislation, Taylor said.

The committee’s recommendations include looking at funding for fusion centers, or centers that monitor threats and then inform agencies as needed, as well as empowering the Texas Education Agency to conduct security audits. Most of the recommendations will require new legislation.

While the committee has developed a list of ideas for the Legislature to review in January, there is no one-size-fits-all solution to school safety, Taylor said.

Each school district faces different challenges when it comes to school safety, but each district, as well as the state, is focused on two key elements: mental health and prevention.

“We can do our very best to reduce the number ... by interacting with people before they get to that point ... and minimize the loss of life,” Taylor said.

“Many of these perpetrators are not mentally ill—they are emotionally ill,” Taylor said.

According to Taylor, adding more school counselors is something the state is discussing, but this is a step PISD has already taken with its latest budget. The district added 11 counseling-related positions for the 2018-19 school year in hopes of addressing mental health concerns, Superintendent John Kelly said.

According to Kelly, prevention also comes from students and staff reporting any suspicious behavior.

All districts have ways for students to report anonymously. AISD and FISD use “If You See Something, Say Something,” a campaign developed by the Department of Homeland Security. FISD gives students a chance to file anonymous reports online, which has been one of the district’s most successful safety measures, Roher said.

Earlier this year, a Friendswood High School student posted a threat on social media. Parents were able to alert the district through an anonymous reporting system. The student was arrested that night—before he could make it to campus the next day.

“As soon as we rolled it out, we got in different reports from students and from parents that we were really able to get ahead of. The layer of school safety that we want to focus on is prevention of issues,” Roher said.