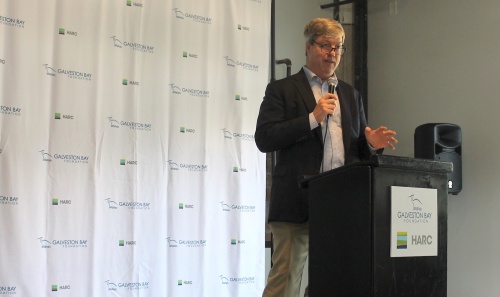 For the fourth straight year, Galveston Bay has gotten a C on a report card compiled by the Houston Advanced Research Center.

At a Wednesday press conference at the Buffalo Bayou Partnership in downtown Houston, HARC and Galveston Bay Foundation officials discussed how the bay is doing and how residents can help it improve.

Officials prefaced their comments by saying what happens in the Greater Houston area's many tributaries and bayous all affect Galveston Bay, making the bay's health an important issue to everyone in and around Houston.

A C grade means the bay is "facing monumental issues," such as habitat degradation, pollution and the effects of climate change. However, the grade also gives hope the bay can get better as residents lessen their effect on the bay and waterways that feed into it, according to the report card.

The bay has gotten a C grade every year since the report card first came out in 2015.

Since the 2017 report card, Galveston Bay has dropped to a D in the wildlife category.

Researchers have noticed a decline in populations of blue crab, which is one of the three most commercially important shellfish in Galveston Bay. Abandoned crab traps sometimes capture and kill blue crabs that aren't collected, and researchers have noticed problems in some blue crabs transitioning from juveniles to adults, affecting their numbers, HARC President Lisa Gonzalez said.

As far as pollution goes, the bay has gone up grades in a couple indicators related to oils spills.

In 2016, there was a huge oil spill along with several large ones that gave the bay a poor grade in 2017. Since then, the number of oil spills has gone down, as has the total volume of oil spilled, resulting in a better grade for 2018, Gonzalez said.

“Oil spills overall have been declining since 2003," she said.

The only indicator to receive an F was the sea level rise indicator under the coastal change category. In short, sea levels are rising faster than officials can keep up with, and that will affect how coastal cities such as Kemah and Galveston plan development in the years to come, Gonzalez said.

The only category to get an A was water quality. Nitrogen, dissolved oxygen and phosphorous levels are good in the bay, rivers and bayous, but researchers have noticed a decrease in phosphorous levels in a couple specific watersheds, Gonzalez said.

Several indicators didn't have enough data to warrant a grade. Gonzalez expressed frustration that HARC is using sometimes years-old data that desperately need to be updated to give researchers a clearer picture of the bay's health.

Galveston Bay Action Network is a phone app residents can download to more easily report pollution in the bay and its tributaries. The foundation has volunteer opportunities for residents to help collect abandoned crab traps, plant marsh grass and clean up beaches, Stokes said.

“We hope that the Galveston Bay report card is a source of information for the general public and will inspire people to participate and take action.” Gonzalez said.

To learn more about the report card, visit www.galvbaygrade.org.