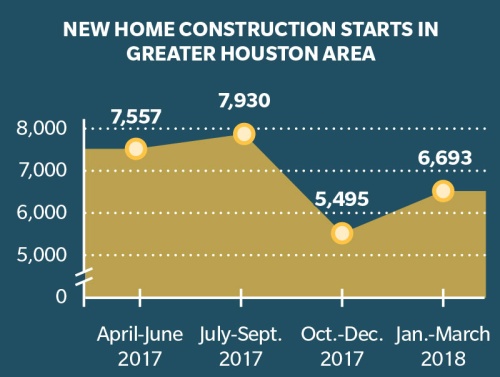 After Hurricane Harvey, more resources were needed to rebuild homes damaged in the storm, which limited the number of homes built at the end of 2017, said Lawrence Dean, regional director of Metrostudy Houston, a real estate and housing market research group.

“Post-Harvey, a significant number of homes had to be rebuilt,” Dean said. “So, homebuilders found that certain types of specialty trade were in short supply.”

Dean said there was a shortage of skilled laborers, such as drywall finishers and cabinetry experts, in the Greater Houston area’s housing market, which meant new homes took longer to build.

On average, it takes builders about four to six months to build a home, although it depends on the size and design of the property, Dean said. However, the shortage of laborers caused an average home’s production timeline after Harvey to increase by one to two months.

Dean said now that the region is almost a year removed from Harvey, production timelines are beginning to revert back to normal.

“We saw a reversal [in the amount of new home construction] in the first 90 days of 2018,” Dean said. “The last few weeks I’ve asked builders, and they say, ‘It has gotten better.’”