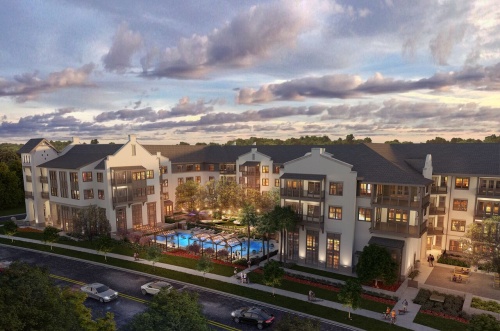 Construction is underway at The Elizabeth at Presidio located near SH 45 N and Lake Creek Parkway.

StreetLights Residential, the developer behind several apartment communities in Northwest Austin, has started building a new project near Cedar Park.

The developer announced May 1 that construction is underway on the 373-unit The Elizabeth at Presidio, which will have one-, two- and three-bedroom apartments ranging in size from 504-1,938 square feet.

The project is one of at least eight apartment complexes that are under construction in the Northwest Austin area.

The Elizabeth will be located at the northeast corner of SH 45 N and Lake Creek Parkway in the Presidio planned development that also includes another StreetLights project, The Michael at Presidio, which opened in 2016.

Amenities at The Elizabeth will include string-light illuminated outdoor patios within a grove, hanging bed tree loungers, a community fire pit, a beer garden with a stage, a pet park, and a dog wash. Indoor amenities will include coworking spaces and conference rooms, a cocktail and coffee bar, a makers garage and a chef’s kitchen, and a fitness studio.

The first units will be available to residents in 2019.

StreetLights is also the developer of The Kenzie at The Domain that opened in 2014 as well as another complex still under construction called Flatiron Domain that will have 372 units opening in spring 2019.