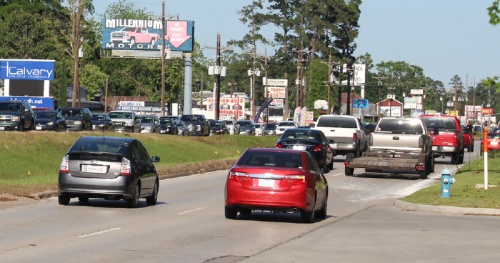 Road congestion spurred by the Greater Houston area’s growing population, lack of funding and limited public transportation costs the community thousands of hours and millions of dollars every year, according to the Texas A&M Transportation Institute.

However, county and state agencies are planning road projects to address these needs. The Texas Department of Transportation, Harris County and other entities are funding projects to alleviate congestion on roads in the Lake Houston area, such as improvements to FM 1960 and Northpark Drive. Other measures—like an increase in public transportation options—may also be needed, experts said.

Alan Clark, the Houston-Galveston Area Council’s director of transportation planning, said he believes more funding needs to be allocated to transportation projects across the region.

“The amount of growth we are expecting means we will have to add a lot of additional capacity,” Clark said.

Another metric factored into this list is the annual cost of congestion on these roadways. Schrank said this cost includes a loss of productivity as drivers wait in traffic as well as the fuel wasted because vehicles are less efficient in stop-and-go conditions. On the aforementioned stretches of FM 1960 and Northpark Drive, this annual cost is about $24.76 million and $12.35 million, respectively.

“It wouldn’t be acceptable if it were trains killing people by crashing or airplanes falling out of the sky, but we don’t seem to pay attention to the fact that … in [the Greater Houston area], we had over 600 people who died of traffic-related accidents last year,” Clark said.

Although there are numerous reasons for traffic, experts agree the Greater Houston area’s growing population is the main culprit. In the ZIP codes comprising the Lake Houston area, the population grew from 154,473 to 292,120 from 2011 to 2016—an increase of 89.11 percent, according to census data.

“I don’t think anybody could have adequately planned a transportation system to meet those demands,” said Andrea French, executive director for Transportation Advocacy Group-Houston.

Another contributing factor is how the Greater Houston area developed outward, making it necessary for individuals to own vehicles, Schrank said. In the Lake Houston area, 92.53 percent of residents drive to work, according to U.S. Census data.

Experts also agree a lack of investment in transportation projects has contributed to mobility issues. Harris County Precinct 4 Commissioner Jack Cagle said the majority of the county’s budget funds law enforcement and health care while the precincts are left with minimal funds for services like transportation.

At the state level, according to the Texas Comptroller’s website, the Texas gas and diesel tax rates have remained at 20 cents per gallon since 1991. Three-quarters of the revenue generated from these taxes fund transportation projects, while one-quarter supports public education.

French said she believes raising fuel taxes to keep pace with inflation would generate a significant amount of revenue to fund transportation projects.

Although the gas tax has remained unchanged since 1991, the state has increased funding for transportation in recent years. The state’s 2018-19 budget allocated $26.6 billion to TxDOT, a $3.5 billion increase from 2016-17. Voters also approved propositions in 2014 and 2015 that gave TxDOT billions of dollars in additional transportation funding.

TxDOT uses its funding to carry out projects on state-owned roads, such as FM 1960 and Hwy. 59. TxDOT Public Information Officer Danny Perez said TxDOT is studying a $98 million project to expand FM 1960 from four undivided lanes to six divided lanes between FM 1960 Business and Lake Houston.

Local road projects are funded by various sources, such as the county, city of Humble and Tax Increment Reinvestment Zone 10. The Lake Houston Redevelopment Authority, which is a subsidiary of the TIRZ, is seeking funding sources to expand Northpark Drive from Hwy. 59 to Woodland Hills Drive, LHRA Chairman Stan Sarman said.

The estimated $60 million project will widen Northpark Drive to a six-lane road and create an overpass at the railroad tracks, Sarman said.

Tom Lambert, CEO of the Metropolitan Transit Authority of Harris County, said connecting the suburban areas of Houston to its urban core is something METRO is looking at in its new long-term plan it will announce this summer, METRO Next. Specific future projects have not yet been chosen, but METRO is looking into the possibility of adding bidirectional HOV lanes, he said.

“Every person that moves here brings at least one car,” French said. “But what is an option is to encourage people to start choosing different options.”
SHARE THIS STORY