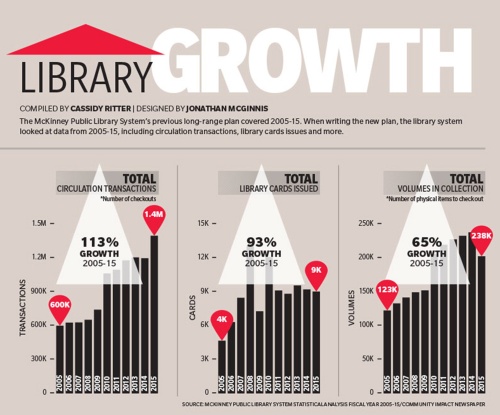 As the two libraries in McKinney—one on the east side of the city and one on the west—see more visitors and circulation continues to grow, Director of Libraries Spencer Smith said the challenge for the library system is to maintain and improve its quality of service.

The library system recently updated its long-range plan, which will be used as a guideline for the next five years. The last long-range plan covered 2005-15. However, library staff found that the city’s growth and social and technology changes required a more frequent approach, resulting in a new five-year plan rather than a 10-year plan.

“The plan was kind of outdated just a few years after it was put out there,” Smith said. “I think it was very ambitious. … The previous plan called for four libraries. … And the cost of doing that was high, was really high, and quite honestly I don’t think that we have tapped all the potential of the two locations we have.”

“We’ve experienced record-setting attendance to events and participation in our reading program the past two years,” Smith said in a city news release. “The increased traffic at the library is a testament to how important the library is to the community as a quality-of-life amenity.”

McKinney resident Kara Hart moved to the city about five years ago. She said her daughter loves reading, and the library is an affordable place to fulfill her daughter’s love.

Hart said the library and its programs offer socialization for her and her children.

“[The library] gives you the opportunity to get out and get interaction to your kids—socialization to your kids without having to spend very much money if at all,” said Tim Mahoney, a Princeton resident but a McKinney library cardholder.

As more people like Hart and Mahoney visit the libraries, additional services, books and programs are expected to be added, Smith said.

Pete Samsury, chairman of the Library Advisory Board, which advises McKinney City Council on matters relating to library services, said the library is making changes to keep up with growth.

The library system will be expanding its adult fiction collection, rearranging collections at the Roy and Helen Hall Memorial Library, digitalizing local history collections, providing e-mail and cloud storage to library account holders, incorporating a database search tool and introducing a 24-hour storefront library, according to the plan.

The libraries’ “bread-and-butter” is children’s programs, which have historically been the main focus of what the library offers, Smith said.

Adult programs, however, are not as plentiful and are an area Samsury said the library system should look into as the percentage of library cards issued to adults has increased 61 percent over the past 10 years.

“What we’re working towards is increasing the quality and quantity of programs,” Smith said. “If you look at some of our surrounding libraries ... our consistency and volume aren’t where they could be, and so we’re working to ramp that up.”

Plans to expand and renovate the John and Judy Gay Library are also in the works. The library is currently 19,000 square feet but will soon have nearly double the square footage, Smith said.

In November 2015 a bond was approved to expand and renovate the library. The expansion, which includes a larger designated teen space and room for extra programs, is still in the design phase, but Smith hopes to schedule a groundbreaking this summer with a completion date of summer 2019.

This spring the libraries will add bilingual literature to its collection, color and double-sided printing, and a mobile library, Smith said.

The bilingual collection, which will be children’s picture and board books to start, will be available at both libraries in late spring.

“We are focusing, currently, on Spanish-English, Hindi-English, Vietnamese-English, Korean-English and Mandarin Chinese-English, but will expand to other languages depending on availability and demand,” said Smith.

The library system plans to release a mobile library in early April. This electric vehicle will allow the library to attend community events and visit a variety of communities in McKinney, Smith said.

The vehicle will have pop-up bookshelves and allow library staff to set up tables and provide Wi-Fi to those nearby.

“If it can do what we think it can do then potentially there will be more [mobile library vehicles] in the future,” Smith said.

According to the long-range plan, a 7,000-square-foot storefront branch is recommended for future use along US 380. The facility would operate 24 hours a day and offer popular materials and meeting space. No timeline is available for this project.
SHARE THIS STORY