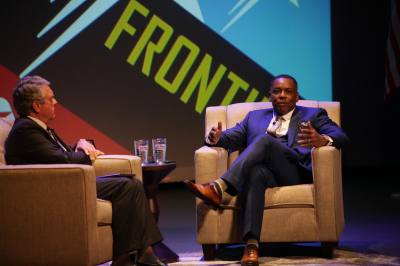 Plano Mayor Harry LaRosiliere talks about the city's plans for 2018 and redevelopment efforts for Collin Creek Mall at the State of the City address Thursday evening.

LaRosiliere said the city is hoping developer Sam Ware of Dreien Opportunity Partners, who has released plans about his $1 billion vision for Collin Creek Mall, will close on the sale of the transaction of the shopping center soon.

“It’s not official yet, but we are hoping by the end of the month that we might see the close of the transaction of Collin Creek Mall,” LaRosiliere said. “If that happens, that will be a catalyst for expanding the boundaries of our downtown.”

Allan Samara, the spokesperson for Plano Future who was present at the address, said he does not hold a similar vision for Collin Creek Mall.

“With the Rosewood development right on [Collin Creek Mall’s] doorstep, and the CityLine development right across Bush Freeway, there’s not really a lot of reason for more multifamily [developments],” Samara said. “Consequently, Collin Creek location is probably an ideal location for tall office buildings that will be a beacon and a gateway for the city.”

In further discussing the future growth in Plano’s southeast corridor, LaRosiliere said he anticipates a new hub of activity due to the proposed Dallas Area Rapid Transit 12th Street Station south of Plano’s downtown core, as well as the city’s plans for its Envision Oak Point program.

“We have policies that are clear about nondiscrimination so that everyone in our city really feels at home,” LaRosiliere said. “A post came out—it is inappropriate because it is not aligned with who we are.”

Protesters and members of the Islamic faith were present at the State of the City address regarding Harrison’s actions.

“The statement that we heard from Mr. Harrison was extremely polarizing—very divisive,” said Azhar Azeez, the president of the Islamic Society of North America. “It’s very unfortunate and we reiterate what the mayor has said—that [Harrison] has to resign. I know he has apologized. Apology is welcome, but he should walk the talk.”

Harrison has since removed the video from his Facebook page and has posted an apology.
SHARE THIS STORY

"We know we cannot require masks but it is our recommendation that individuals who are not fully vaccinated continue to wear an appropriate face mask when around others," Assistant Superintendent Beth Brockman said.

The new Chili's restaurant, which will be in the former location of Osaka Sushi, will be the chain's second Plano location.