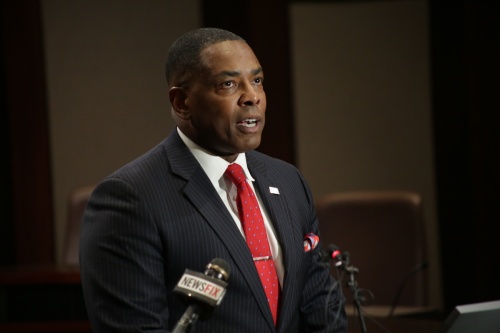 The Plano City Council member who shared a video on his personal Facebook page that encouraged President Donald Trump to "ban Islam" from schools denied on Wednesday that his decision to share it was anti-Muslim.

Harrison released a statement on his Facebook page late Wednesday in which he apologized to the Muslim community in Plano for sharing the video, but did not address the mayor's call for him to resign.

"My intent on inputting this on my personal Facebook page was to emphasize that Christianity is not the only religion being targeted for exclusion in our public school," Harrison wrote in reference to the video he shared the previous day. "It was not meant as a personal attack against the Islamic faith."

The video depicted students wearing hijabs while working at their classroom desks with the caption, “share if you think Trump should ban Islam in American schools.”

Hours after the mayor's press conference, Council Member Rick Grady, who serves in one of the council's leadership positions, joined LaRosiliere's call for Harrison to resign in a Facebook post of his own.

"This inexcusable and unacceptable posting by a council member has no place in our city and does not represent the values we hold dear in the City of Plano," Grady wrote. "My personal apology to our Islamic community, and to the entire Plano citizenry, for an appalling posting and video shared by a council member. I stand with our Mayor in calling for an immediate submission of resignation from this council member."

Harrison did not immediately return emails and messages on Wednesday requesting a response.

“Mr. Harrison’s conduct is unbefitting of a council member that serves a diverse community and that serves the city of excellence,” LaRosiliere said.

The city of Plano permits a recall vote of city officials, including council members, if a petition reaches the number of signatures equaling 30 percent of the votes cast in the regular municipal election of the city, according to the Plano City Charter Municipal Code.

“Right now, I am asking Mr. Harrison to take the honorable action of resigning. That’s where I am at today,” LaRosiliere told reporters.

Plano residents, including members of the Islamic faith, were present at the press conference.

“To see this from one of the council members was jarring and it makes you think twice about what people passing by think about you,” said Inayet Sahin, a Plano resident present at the press conference. “But that the mayor and his office took such quick action is reassuring and it tells Islamaphobes and people of hate that their comments are unacceptable.” A video shared on Plano City Council Member Tom Harrison's Facebook page has since been removed.[/caption]

Correction: A prior version of this post misidentified the day of the week on which the mayor called on Tom Harrison to resign. The mayor's press conference was held on Wednesday, not Tuesday.