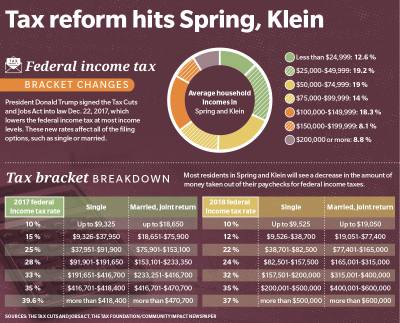 The new federal tax plan implements temporary and permanent changes that will affect individuals, businesses, corporations and school districts in Spring and Klein.

The new law will also affect taxpayers by expanding the child tax credit, placing a cap on how much individuals can write off in state and local taxes and limiting how school districts can refinance their bonds, officials said.

“Our goal was [to create] more jobs, bigger paychecks and to make America the place for the next big job or next manufacturing plant,” Brady said.

Patrick Jankowski, senior vice president of research for the Greater Houston Partnership, said it is too soon to tell how the tax reform will affect the Greater Houston area, but a lower tax burden could give consumers more money to spend, which could stimulate the economy.

“Depending where you are [in the tax brackets], that could make a difference between being able to take your family out to eat one more time a month or enough of an impact where you could buy that new truck you’ve been looking at,” Jankowski said.

A major component of the reform is a set of lower federal income tax rates for most income levels, Brady said.

Brady said families with children will also see an increase in the child tax credit, which taxpayers can use to reduce their federal income tax bills. The credit previously provided up to $1,000 for each child younger than 17 years old in a household, but the new plan doubles the credit to $2,000. This benefit could help the
37.4 percent of families in Spring and Klein with children younger than 18 years old, according to U.S. Census Bureau data.

Another aspect of the new tax plan that will affect individuals is the $10,000 cap set for state and local tax deductions. Placing a cap on this deduction—which allows homeowners to deduct property tax expenses on their federal taxes every year and previously had no cap—could affect a number of Texans who pay more than $10,000 a year in property taxes, said Dick Lavine, senior fiscal analyst at the Center for Public Policy Priorities, an Austin-based policy center.

For example, the owner of a $435,000 home in Spring ISD would have to pay about $10,092 a year, without exemptions, in property taxes based on 2017 tax rates for Spring ISD, Harris County, emergency services districts and other taxing entities. With this new plan, the homeowner would not be able to write off that full amount.

“Your out-of-pocket property tax is going to go up, and you’re not getting better police and fire protection, and it’s not helping your schools—you’re just paying more,” Lavine said.

Lavine said this cap could also make it difficult for taxing entities to raise property taxes to fund public services.

“The impact is that people maybe will be more reluctant to fund state and local services through voting, approving higher property taxes or voting for city council or whoever is going to raise their taxes,” Lavine said.

Harris County Precinct 4 Commissioner Jack Cagle said voters are already reluctant to approve raising property taxes, but will vote to do so if it provides funding for major issues, such as flood control. He also said he would like the county to move away from its reliance on property taxes.

According to a 2018-19 budget presentation considered by commissioners court on Jan. 30, property taxes make up 79 percent of the county’s general fund.

Along with the changes to individual income brackets, this new plan includes a significant decrease to the corporate tax rate and provides incentives for small businesses.

The plan cuts the corporate tax rate, which is the percent of a company’s income that is paid to the federal government, from 35 percent to 21 percent. Also, small businesses have the chance to qualify for a
20 percent tax deduction on their income. Business owners who file their taxes as single with an income below $157,500, or file their taxes as joint with an income below $315,000 could be eligible for this deduction.

Jankowski said a lower corporate tax rate will increase the profits of local corporations, such as ExxonMobil—which has a campus near I-45 in Springwoods Village—and Noble Energy—which is located near Hwy. 249 and Louetta Road. Companies could potentially take these higher profits and reinvest in the company by purchasing new facilities or equipment, he said.

ExxonMobil CEO Darren Woods cited the new tax plan when he said in a statement Jan. 29 that the company plans to invest more than $50 billion over the next five years to grow its business within the U.S.

“These investments are underpinned by the unique strengths of our company and enhanced by the historic tax reform recently signed into law,” Woods said.

Barbara Thomason, president of the Houston Northwest Chamber of Commerce, said she believes small businesses in Spring and Klein will benefit from the deductions included in the new tax plan as well as the benefit of residents having more money to spend.

Lawrence Dean, regional director of Metrostudy Houston, a real estate and housing market research group, said it is too soon to tell how this new tax policy will affect the Houston area’s real estate market.

Dean said the reform will primarily affect metropolitan areas with much higher home values than Houston—such as New York or Los Angeles. However, he said he believes the property tax deduction cap could become an issue for suburban areas like Spring and Klein where property taxes function as school districts’ primary revenue sources.

But, he said he does not believe the deduction cap will deter residents from moving into more expensive homes with higher property taxes.

“Home buying is ... an emotionally driven process, so I anticipate that would not be on the top of peoples’ minds as they decide what home to buy,” Dean said.

Although property taxes are a significant revenue source for school districts—comprising 38 percent of Spring ISD’s revenue and 51 percent of Klein ISD’s revenue—KISD Chief Financial Officer Dan Schaefer said he does not believe KISD will be affected by the deduction cap.

“The average taxable value on residences in Klein ISD as of Jan. 1, 2017, is $188,534,” Schaefer said. “Based on the overall tax rate for our area [the deduction cap] would not affect the average residence.”

SISD officials also do not believe the cap will affect the school district.

“Typically, school districts only go to the voters to raise taxes when there is a need to issue debt to cover the cost of capital needs,” Chief Financial Officer Ann Westbrooks said.

She said in the future, if the district does have to turn to voters to raise taxes, she hopes they take the district’s needs into consideration.

However, one aspect of the new tax policy that does affect districts is a change in when they are able to refinance their bonds, which could limit their ability to save on bond interest.

Under the new code, school districts are no longer able to advance refund their bonds, which was often done to take advantage of favorable interest rates, Schaefer said.

Bonds are sold with 10-year call dates, meaning the district can decide whether to refinance the bond after that time. However, advance refunding allowed districts to refinance bonds earlier to benefit from lower interest rates, he said.

Previously, if KISD were to save money on interest rate costs, it would allow the district to move forward quicker with projects funded from its bond referendums. However, missing out on these savings will not delay any of the projects funded by the $498.1 million bond approved by voters in 2015, Schaefer said.

Westbrooks said the district was also working to advance refund bonds before the law passed, which would have saved the district about $4 million. However, she said that savings is not completely lost because in the future, when the bond is eligible for refinancing, the interest rate could be the same or lower.