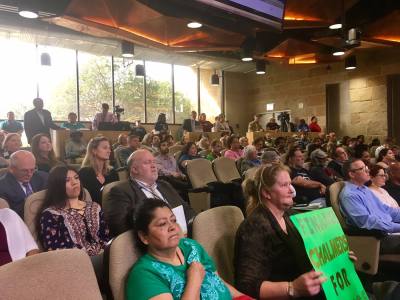 Austin City Council threw support behind the Chalmers Courts housing project in its quest for low-income housing tax credits. Residents and community members came out in droves to support the project.

City Council faced a choice between two projects officials agreed were valuable to the community. Due to a state law that forbids tax credits being awarded to two projects within a 2-mile radius, council members could only support one project.

The Chalmers Courts project is a redevelopment and expansion of a low-income housing development at 1801 E. Fourth St., Austin, where residents currently live within cinderblock walls with no central air conditioning or heating and no washer and dryer connections, according to public testimony. The project is headed by the Housing Authority City of Austin, or HACA.

Residents from Chalmers Courts and other members of the community packed City Council’s chambers on Thursday to show support for the HACA project.

The highly competitive 9-percent low-income housing tax credits the projects were targeting provide financial flexibility crucial to incentivizing these low-income developments. Although the money comes from a federal program, the state awards projects based on a points system. City Council’s support on Thursday did not guarantee the tax credits will be awarded, but gave Chalmers Courts an additional two points that will be crucial when it comes to the state’s decision.

The decision now lies with the Texas Department of Housing and Community Affairs. According to city documents, the deadline for applications is March 1.
SHARE THIS STORY

A new location for the chicken giant is coming to 600 Congress Ave.