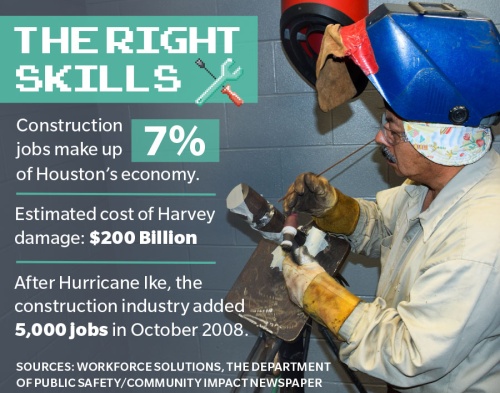 From plumbers to electricians, a shortage of craftspeople existed before Harvey, but now the industry is struggling to meet the extra demand brought about by the storm.

“Prior to Harvey, there was already a shortage of trained plumbers. Not just plumbers, but all crafts across the spectrum,” said Wayne Lord, business manager for Plumbers Local Union 68. The group represents plumbers throughout the Texas Gulf Coast, including the Katy area.

“All Harvey did really was kind of exacerbate the shortage,” he said.

Lord and Paul Puente, executive secretary for the Houston Gulf Coast Building and Construction Trades Council, were concerned about Harvey sending homeowners to contractors with less know-how than licensed craftspeople.

Lord encourages residents to hire contractors licensed in Texas, preferably from their own communities. The Katy area has about 250 plumbers local to the community who are union members with proper training, he said.

“You do get a lot of people that just follow disasters and not all of them are scrupulous as, you know, contractors that live here, and are part of our community,” Lord said.

Lord and Puente acknowledged that union and other licensed contractors are usually more expensive to hire than unlicensed, nonunion companies, but said the adage, “You get what you pay for,” rings true.

“Just like when you go to the grocery store and you have a name brand and the generic right next to it, we’re the name brand,” Puente said.

Homeowners can take steps to protect themselves from less reputable contractors, according to the Federal Trade Commission. The FTC recommends on its website that homeowners get written requests from multiple contractors, sign a contract in advance of money being exchanged and never pay in cash.

Lord, Puente and the FTC said a reputable contractor will be willing to provide a license from the Texas Department of Licensing and Regulation for electricians and insulation installers and the Texas State Board of Plumbing Examiners for plumbers.

But Jeff Reina, co-owner of TriFection Remodeling and Construction, a general contractor in the Katy area, understands that homeowners are anxious to get back to normal after the flooding.

“In the short term, there’s a lot of people out there that—because they’re getting a little desperate—will start using whoever [is available] on their homes,” Lord said. “It may damage their home, which is a major investment.”

Jobs, but no skilled laborers

In Katy, Reina said he saw his company’s workload increase by 30 to 50 percent overnight following Harvey. The business has a waiting list of prospective clients.

“We’re a growing company, so we’re always looking for skilled labor. We’ve got a reduced ability to find skilled trade labor,” Reina said. “It was an issue, even before the hurricane.”

“Even though it may be that kids in high school think this is not a viable option, if you’re doing an apprenticeship, you’re getting paid,” Givens said.

According to the TWC website, salaries for skilled construction labor at the apprentice level start at about $30,000.

“I’d just say in general across our society, there has just been a shift away from vocational training in our schools,” Reina said.

Katy ISD spokesperson Maria DiPetta said each district high school offers or will offer trade education on campus. The classes are electives and generally available to 11th- and 12th-graders. However, construction is not a focus in KISD.

“Currently, we do not offer ‘traditional trades’ in Katy, which are construction trades that include plumbing, heating, ventilation and cooling, electricity [and] welding [other than agricultural welding],” DiPetta said in an emailed statement.

The skilled trades are in high demand right now, said Michelle Ramirez, the strategic planning manager at the Workforce Solutions office,  which covers the Houston-Galveston region, including the Katy area.

Construction jobs make up about 7 percent of the Houston metro area’s economy, according to reports provided by Workforce Solutions.

“Even the city of Houston needs craftsmen. [It is] repairing public facilities, and we know they are trying to fill at least 400 jobs,” Ramirez said.

To aid in the Harvey recovery effort, PLU 68, which represents plumbers throughout Katy and the Greater Houston area, is working with the Texas Board of Plumbing Examiners to help qualified individuals from out of state obtain temporary permits, Lord said.

The challenge with temporary permitting is ensuring those receiving permits can do the work correctly, Puente said.

Both PLU 68 and the council perform outreach in schools in the Greater Houston area, the goal being to get shop classes back in schools to teach the basics, Lord and Puente said.

PLU 68 has a $1.9 million apprenticeship program for the Greater Houston area. The program includes classroom and hands-on work, as well as building code instruction for safety reasons, Lord said.

By contrast, the Houston Community College vocational program has two tracks, said Kris Asper, dean of construction engineering technology. One is an apprenticeship program and the other is a classroom-oriented training program on campus.

“[HCC instructors] just teach you to swing a hammer and send you on your way, [and the funding] comes from your pocket,” Asper said.

For the current semester, the union accepted about 120 out of more than 400 applicants for the apprenticeship program, Lord said. But younger applicants often cannot pass basic skills testing such as reading a measuring tape or reading basic diagrams.

Puente said one of the challenges is to ensure that apprentices have a mentor, as unions maintain a ratio of no more than two apprentices per journeyman on a job site. He and Lord both said the trades have gotten a false reputation of being less respectable than a white-collar job that requires a college education.

“At the moment there are not enough [construction professionals],” Puente said. “All of [the construction trades] are short-staffed because of the amount of work that’s out there and the need.”
SHARE THIS STORY