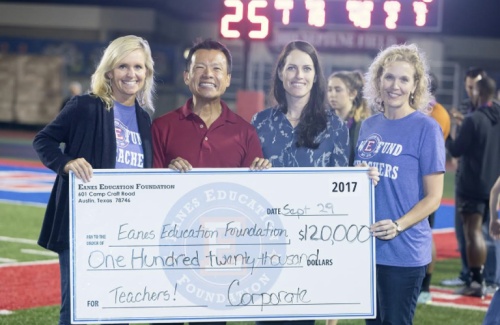 Eanes ISD campuses will be able to fund the hiring of additional teachers thanks to the generosity of local businesses which contributed to the Eanes Education Foundation Teacher Fund.

Baylor Scott & White representatives joined a number of local businesses in presenting a check for $120,000 to the Eanes Education Foundation (EEF) as part of the kickoff of the 2017-18 EEF Teacher Fund, according to a release.

Of the total donation, $5,000 was contributed by Baylor Scott & White, which served as an official tailgate sponsor for the Battle of the Lakes matchup between Westlake High school and Lake Travis High School on Oct. 13.

The check was presented during the Westlake High School football game on September 29 against Vandegrift High School.