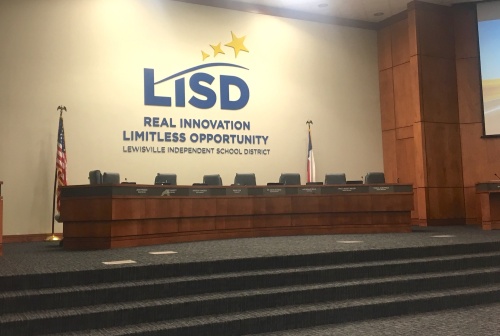 Lewisville ISD officials are evaluating the district’s class ranking policy. At the crux of the issue is deciding if graduating classes should be ranked academically by GPA.

LISD Chief Communications Officer Amanda Brim said the district is re-evaluating its ranking process to consider how the reporting of GPA on high school transcripts can benefit, or negatively impact students as they apply for college.

“This meeting is happening throughout the state,” Chief Schools Officer Joseph Coburn said. “It’s a hot-button issue for lots of people.”

On Oct. 25, the board of trustees held a workshop to discuss if the district’s policy of ranking all students is in the best interest of graduating seniors. No decisions have been made.

At the Oct. 16 meeting, trustees said they were looking at three different options: keeping the “rank-all” system; ranking only the top 10 percent; or using an opt-in/opt-out policy in which students are given a choice in whether they want to be ranked.

“I fundamentally believe we need to remove the ‘rank all.’ I am open to other options such as the opt-in system,” trustee Tracy Scott Miller said.

Brim said district leaders will continue to evaluate the options and conduct conversations with key stakeholders before bringing a recommendation forward to the board at some point in the future.

If LISD does away with the policy of ranking students in each graduating class, it would not be the first district to abandon the practice. Several North Texas public school districts, such as Highland Park ISD and Southlake’s Carroll ISD, do not rank all students. Plano ISD is also evaluating its class-ranking policy.

Brim said under any scenario, a valedictorian and salutatorian will still be selected. Additionally, the top 10 percent of each graduating class would still be reported, as state law requires.
SHARE THIS STORY