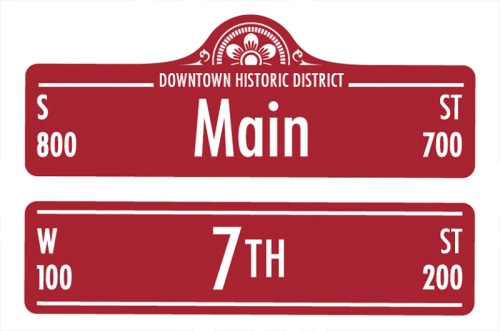 The design of new street signs in Georgetown's historic downtown and Old Town districts was inspired by local culture and architecture.

Although street signs the city of Georgetown will install over the Oct. 14 weekend will be brand-new, residents might recognize familiar inspiration behind the signs' new design.

The city will replace existing street signs throughout Georgetown's Old Town and downtown areas with 554 new signs that are red in color and designate the areas as historic districts, according to a news release. The signs' new design will help identify the districts and emphasize Georgetown’s history to both residents and visitors alike, according to city officials.

The new signs are a shade of red reminiscent of poppies and also feature the flower as part of the design.Local artist Nick Ramos, who designed architectural details on the signs, was also inspired by the large number of Mesker Brothers storefronts downtown, according to the news release.

The designs were approved by City Council in June 2016. The signs are partially funded by the downtown tax increment reinvestment zone, which helps fund improvement projects throughout the downtown area, according to the news release.

Residents who were fond of the original blue signs can purchase them for $10 on a first-come, first-serve basis during the Nov. 11 Market Days event on The Square.
SHARE THIS STORY