SLIDESHOW: Officials assess Harvey damage, community needs and the next step in Spring and Klein 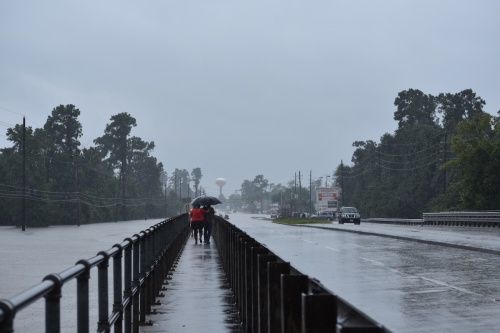 The water in Cypress Creek almost reached the top of the Stuebner Airline Road bridge in Spring on Tuesday. Local officials are beginning to assess the damage Tropical Storm Harvey has caused in Spring and Klein, while residents and business owners begin to recover from the storm.

Harris County Precinct 4 Constable Mark Herman said his office assisted with evacuations in the Enchanted Oaks subdivision south of Cypresswood Drive Tuesday morning. Herman said Inverness Forest—located south of Cypress Creek and north of FM 1960— is another area of concern. Portions of that subdivision were evacuated on Monday and Tuesday, and an evacuation notice remained in effect on Wednesday.

Herman said deputies work with whichever fire department has jurisdiction in the affected area during evacuations.

The constable’s command center on Cypresswood Drive is flooded with six feet of water, Herman said Tuesday. The office moved to its mobile command center at Faithbridge Church on Stuebner Airline Road, and its six substations throughout the precinct are still open, he said.

Myeshi Briley, president of the Spring-Klein Chamber of Commerce, said she is reaching out to business owners and compiling information about how each was affected.

Briley said she has contacted the Federal Emergency Management Agency and plans to contact the City of Houston to find out what resources are available to local business owners. Briley said she is also working with the Lowe’s home improvement store on FM 2920 to provide local business owners with mops, buckets and other items that will help with the cleanup and repair process.

Barbara Thomason, president of the Houston Northwest Chamber of Commerce, said Tuesday that the chamber had not yet heard from its members because the chamber’s phones and server were offline. However, Thomason said the chamber is working on setting up a fund specifically for businesses affected in northwest Harris County as soon as possible.

One of many senior living facilities on Cypresswood Drive affected by the storm is Autumn Leaves of Cypresswood—an assisted living facility for people with Alzheimer’s and dementia. Spokeswoman Laurie Hesser said the facility flooded and was evacuated by the Klein Volunteer Fire Department early Monday morning.

“We were waiting on EMS, but everybody was safe, we had power at the time,” Hesser said. “Also, we certainly had adequate food, water and supplies. Residents were in good hands.”

The 33 residents were transported to Silverado Vintage Preserve Memory Care Community on Louetta Road. All of the residents’ families were informed through both phone and email. Hesser said there was no estimate available of when the residents will return.

Hesser said the facility also evacuated during the flooding that occurred in April 2016.

Another care facility which has experienced evacuations is the Houston Northwest Medical Center, located at 710 FM 1960 W., Houston. Six critical care patients were evacuated from the hospital on Tuesday afternoon.
SHARE THIS STORY