Austin City Council: What to look for on Thursday's agenda 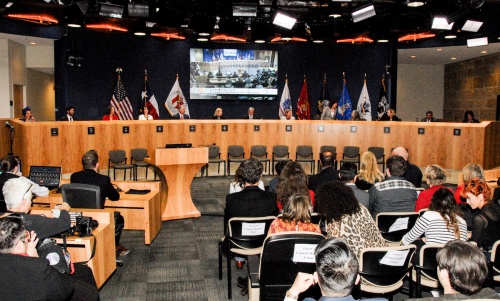 The second edition of the 11-member Austin City Council holds its first regular official meeting of the year Thursday. The meeting will be the first for District 6 Council Member Jimmy Flannigan and District 10 Council Member Alison Alter.

Here are some of the key agenda items anticipated to be discussed Thursday:

The pilot program would extend the district's outdoor live music curfew from 12 a.m. to 2 a.m. Here’s a story we wrote on the program back in December.


Item 21: Authorization of consent to partition, partial assignment and assumption of lease agreement between The Austin Symphony Orchestra Society and Waller Creek Conservancy, relating to an existing long-term lease on Symphony Square, located at 1101 Red River

If approved, the city will receive a $1.9 million grant from TxDOT to install three types of pedestrian safety devices throughout the city: pedestrian countdown times, pedestrian hybrid beacons and accessible pedestrian signals.


Item 35: Authorize negotiation and execution of interlocal agreement with CapMetro to establish a public plaza and permanent downtown rail station on Fourth Street (between Red River and Trinity streets) and establish two-way traffic on Fifth Street between I-35 and Brazos Street

This item has been postponed since the fall. TxDOT has provided $50 million grant for the rail station and purchase of four rail vehicles.


Item 40: Resolution related to the economic viability if Austin’s music and creative industries

As part of the city’s 0 Waste by 2040 goal, Austin Resource Recovery negotiated a contract for a curbside textile pickup pilot program but failed to host stakeholder meetings. Turns out organizations that would have received the textiles believe they would be negatively impacted, so the council is asking the City Manager to terminate the contract.


Item 46: Resolution to remove the supermajority requirement from the Historic Landmark Commission to recommend historic zoning of a property over protest of an owner

Currently, if a property owner objects to historic zoning of their property, the HLC must conjure up two-thirds majority–or eight of 11 votes–to initiate historic zoning. There have been attendance issues at the HLC, which have resulted in the failure of ability to initiate the zoning, resulting in the failure to block the release of a demolition permit. Mayor Pro Tem Tovo sponsored the resolution.

Here's a story we wrote on the task force's report last month. During Tuesday’s work session, Alter said she would make a motion to begin work on the more immediate aspects of the report, which recommends the city begin renovating East Austin parks so they can serve as adequate event spaces. Adler advised exercising caution in pushing forward with anything more than an approval of the report.
SHARE THIS STORY