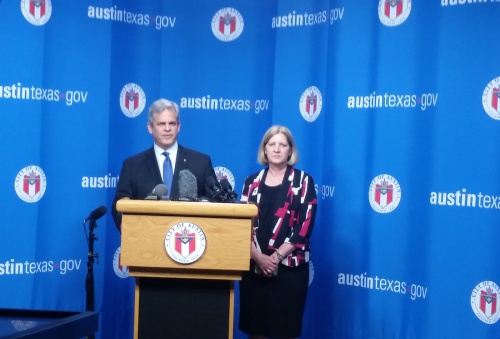 The announcement was made during a news conference Friday morning.

Acevedo announced yesterday he would be stepping down from the chief position in Austin to become Houston's police chief.

During the new conference Friday, Acevedo called the police department his family.

"It's hard to say goodbye to the people you love, to the community you love," he said.

"I commend the appointment of Brian Manley as interim police chief. Brian Manley is a strong, knowledgeable leader. I’ve been with him many times and have seen first-hand his commitment to our community and to building relationships. He understands our challenges we face and is ready to lead. I’m confident Chief Manley will keep us safe and just."

An Austin native, Manley began as a patrol officer for APD in 1991. He moved through the ranks throughout the years, most recently becoming chief of staff in 2015.

He will begin his role Dec. 1.

Departing Austin Police Chief Art Acevedo urged Austinites to reflect on the state of the community and the police department when he began running the department nearly 10 years ago.

In his statement, he said he felt the timing was right to leave Austin for Houston.

"Serving this great city has been the honor of a lifetime," he said. "During my nearly 10-year journey with the city, many improvements have been made both within the police department and to our relationship with the community. Together we have addressed many challenges and truly made Austin a safer community. Collectively we have pursued excellence for the Austin Police Department."

Acevedo's last day with APD has not been set. A new interim police chief is expected to be named as early as today.

Interim city of Austin Manager Elaine Hart said she would speak with various Austin police officers in the coming days before deciding who should replace outgoing Police Chief Art Acevedo on an interim basis.

During a news conference in Houston, Acevedo said he was overwhelmed by the support from the Houston Police Department and was ready to "think big" and take on the challenge of working in the city and with city officials.

"You're going to see some great things," Acevedo said.

Hart said she could name someone to serve as interim Austin Police chief as early as tomorrow, adding Chief of Staff Brian Manley is the seniormost officer in the department.

She said she was looking for an interim chief who could carry on the workforce of the department and provide the necessary leadership until a permanent chief could be named.

"[Acevedo] will be missed," Hart said in a news conference Thursday. "It's going to be hard to replace him."

Hart was named interim city manager following Mark Ott's departure in October, and she recommended leaving the decision of who to replace Acevedo in the hands of the new permanent city manager.

"I encourage [the city] not to prolong that process," she said.

Acevedo's final day with APD has not been set.

Hart said it took about a year for the city to hire Acevedo in July 2007, and she expects to follow that time frame for the new permanent police chief. She said she expects to receive input from the community on the permanent chief, but that it would be impossible to find a "carbon copy" of Acevedo.

Austin Mayor Steve Adler said this was an opportunity Acevedo felt he needed to take, and that he was happy for him.

"From my perspective, this has come real quickly," he said.

Adler said the city had faced challenges during Acevedo's tenure but did not wish to go into specifics.

Last year, Acevedo was in the running for the San Antonio Police Chief position but pulled out of the search after receiving a pay raise.

According to the Texas Tribune, Acevedo's salary is $206,086. Retiring Houston Police Chief McClelland's salary was listed as $275,000.

According to data from the U.S. Census Bureau, the city of Houston's population was nearly 2.3 million people in 2015.

The Houston mayor is expected to ask Houston City Council to confirm the hiring of Acevedo Nov. 30, according to a news release.

“Our beloved city has been very well-served by Police Chief Art Acevedo. I want to personally thank him for his service. I particularly appreciate his focus on protecting the residents of our community in a way that builds trust and respect. The City of Houston is very lucky to have him. I look forward to working with Mayor Adler, City Manager Hart and the rest of the Council to ensure our new Police Chief will follow in the footsteps of Chief Acevedo and continue the same commitment to public service and public safety.”

The Austin American-Statesman and CBS Austin are reporting that Austin Police Chief Art Acevedo has accepted a position as Houston's Police Chief.

Martha I. Montalvo is currently the interim police chief at the Houston Police Department. She has spent 36 years with HPD.

Montalvo replaced Chief Charles McClelland, who retired Feb. 26 after 39 years with the department.

"Houston is getting a world-class police chief. Chief Acevedo has made our community safer and closer, and he is trusted and much loved by so many. Austin is losing a moral and joyous leader, and I’m losing a friend."

Adler said losing Acevedo is a "huge deal" and replacing him would be a "daunting task."

"We’ll shortly have a new city manager and a new police chief, and this gives Austin a unique opportunity to enter a new era in our history," he said.