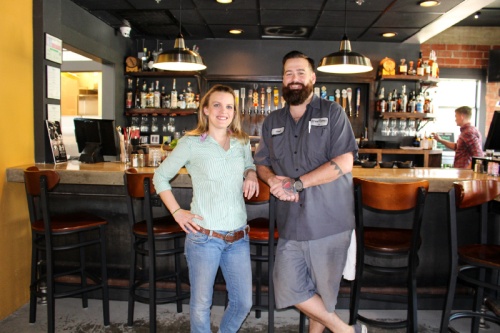 New Braunfels native Chad Niland got his first restaurant job as a dishwasher. One day, when the cook called in sick, Niland was asked to run the grill.

“Since then I’ve gravitated towards the kitchen,” he said.

Fast-forward 18 years, and Niland and his wife, Caitlin, can be found running their own restaurant and bar. The Downtowner, located at 208 S. Castell Ave., serves what Niland calls “high-end comfort food,” and more often than not, the ingredients are locally sourced.

“We have such good stuff around us, so whenever we can, we try to look near first,” Niland said.

The bar offers a selection of on-tap beers and craft cocktails. The cocktails are made from “simple, clean recipes” that include homemade fusions and fresh-squeezed juices, Niland said.

The Downtowner sits in a historic building that is the previous home of Ol’Bossy Milk Co., which shut down in the 1970s. The Niland family purchased the property four years ago, and after three years of demolition and construction the restaurant opened in December 2016.

“It’s been the most stressful year that I’ve ever [had], but so worth it,” Niland said. “The town has given us the warmest reception ever.”

Besides eclectic bar options, seasonal food and drink items and a brunch menu, guests at The Downtowner can enjoy a simultaneously modern and vintage atmosphere. Local musical acts and a Saturday morning “Soul Brunch” at which DJ Barrett Reid plays soul and funk records are also offered.

“We try to get people to slow down and enjoy their time here,” Niland said.

One aspect of restaurant life that pushed Niland to open his own place was the demanding schedule that forced him to miss his son’s birthday parties and other family functions, he said. He wanted a more family-friendly lifestyle, and the 42 employees at The Downtowner enjoy holidays off work because “we’re essentially a mom and pop shop,” Niland said.

Niland said he is looking to New Braunfels residents to help shape the future of his establishment.