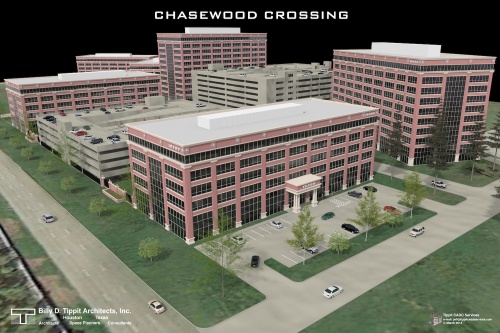 Two of the six proposed buildings at Chasewood Crossing's office park have been built, and the third broke ground on June 28.

Show map
Development is underway for a six-story, Class A office building located off Hwy. 249.

Chasewood Crossing Three will be ready for interior buildout in 10 months and ready for occupancy in 14 months, said Jaclynn Zimowski, a spokeswoman for Brenda Pennington Commercial Real Estate, the broker for the property.

Chasewood Crossing Three LP is the developer for the property, and Billy D. Tippit Architects is the architectural firm working on the project.

Chasewood Crossing business park's first two buildings were completed in 2008 and 2012. The park is expected to be completed in 2022. It will include pad sites for medical, restaurant and senior living options, Zimowski said.

"We have hospital discussions on 29 acres and senior living on 15 acres, as well as a mixed-use high-rise condo [which would be 20 stories]," she said.

The total cost for developing all six buildings is $320 million.