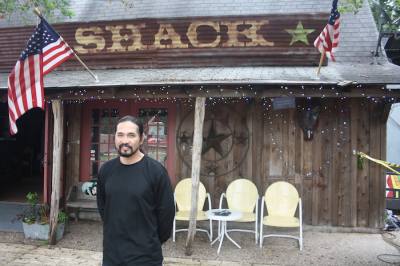 Joe Duong has owned The Shack Burger Resort on Cypress Rosehill Road since 2011.

Show map
Joe Duong, who has owned and managed The Shack Burger Resort on Cypress Rosehill Road in Cypress since 2011, has embarked on an effort to open a combination bar and food trailer park on Mueschke Road this spring.

The currently unnamed park will be located on roughly 5 acres of land at 15810 Mueschke Road, Cypress, where Smoken Joe's Pit Barbecue was formerly located. Early plans involve turning the site into a family-friendly and pet-friendly food trailer park featuring a large outdoor pavilion, a playground area and an outdoor bar that will serve beer and wine, Duong said. The building on-site will be used for storage space, he said.

"I've always wanted to do a food truck park out here," Duong said.

Duong said he was hoping for a mid-March opening, estimating the process of cleaning up the site and installing a power source for food trucks would take about 60 days. He said he is also in the process of acquiring a license to sell beer and wine, which he said could take three months.

Specifics on how many and what kind of food trucks will be on-site are still being worked out, Duong said. He said he is on the lookout for trucks specializing in crawfish and Cajun food as well as trucks offering specialized cuisines that are otherwise hard to find in Cypress.

Duong said he would like to have a mix of food trucks that customers could expect to be on-site whenever they stop by as well as trucks that would rotate on a daily or weekly basis. He said he also hopes to turn the park into an opportunity for people hoping to get into the food truck scene to build their business.

"[For] local operators that want to start something new and have an idea, this could be a great opportunity for them," he said. "We can help them grow and build their business. I'd like to try to help and groom some people and mentor them a little bit so they can see what the business is all about."
SHARE THIS STORY