Despite progress toward cleaner air, Houston area and Katy ozone still a concern 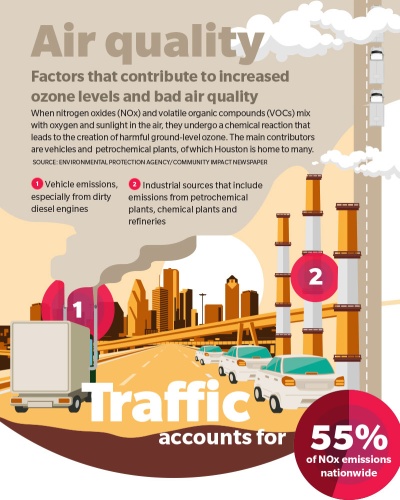 UPDATE: In the American Lung Association 2018 State of the Air report, which was released April 18, Houston was ranked No. 11 in the nation for the most polluted city for ozone. Previous versions of this story included findings from the 2017 State of the Air report that ranked Houston No. 12 in the nation for ozone. The updated version of this story reflects this new ranking. Over the last 25 years, Houston’s air quality and ozone levels have improved dramatically, according to local air quality researchers, scientists and government representatives.

According to the Texas Commission on Environmental Quality, from 2000 to 2016, the Houston-Galveston-Brazoria population increased by 44 percent, while the eight-hour ozone design value, a measurement used for ozone levels, improved by 29 percent. Despite this progress, Houston is still not in the clear in terms of meeting the Environmental Protection Agency’s standards.

“Ozone pollution is still a challenge, because the standard has repeatedly been made more stringent,” Andrew Keese, TCEQ media relations specialist wrote in an email.

According to the American Lung Association, Houston is ranked No. 11 nationally for having high ozone levels.

“We are getting this uptick in pollution—not anywhere near the levels that we saw 10, 15, years ago—but it isn’t on that same steady decline that we had been seeing,” said Stephanie Thomas, a Houston-based researcher for Public Citizen, a nonprofit political advocacy organization and member organization of the Houston Healthy Port Communities Coalition. “It seems like we are kind of plateauing, especially in terms of ozone pollution.”

Experts from the Houston-Galveston Area Council said under the EPA’s 2008 National Ambient Air Quality Standards and based on emissions from previous years, they anticipate the EPA will reclassify Houston as “serious” sometime this summer, meaning the region’s air quality has not improved enough to meet EPA standards.

“We have a ways to go [in terms of improving air quality in Houston],” H-GAC Air Quality Manager Shelley Whitworth said.

The Clean Air Act, a federal law passed in 1970 to control air quality, makes it a requirement for the EPA to issue standards known as the NAAQS for six criteria pollutants: carbon monoxide, nitrogen dioxide, lead, ozone, or smog, particulate matter and sulfur dioxide, according to the EPA’s website.

There are hundreds of other pollutants that affect air quality, but local experts have said two of the most critical to Houston are particulate matter, also known as particle pollution, and ground-level ozone.

Different from stratospheric ozone—which is found naturally in the earth’s upper atmosphere—ground-level ozone is created from natural and man-made chemical compounds and pollutants, according to the TCEQ.

Ozone in Texas is measured by the TCEQ’s network of regional ozone monitors that meet federal requirements, Keese said. The TCEQ uses these air monitoring stations across the Greater Houston area to track emissions, and if levels of any of the six criteria pollutants exceed the standards issued by the EPA, that area is called a nonattainment area.

While the city is in attainment with five of the six NAAQ’s, Houston has never reached attainment for ozone.

“Under current law, the EPA is required to review these standards every five years…Houston is still nonattainment despite all the progress we’ve made,” said U.S. Rep. District 22 Pete Olson-R, Sugar Land.  “We could not hit that goal in five years despite making all this progress.”

In order to make it easier for states to comply with new ozone standards, Olson has been working on getting House Resolution 806, the Ozone Standards Implementation Act, through the Senate. It passed the House last summer but has not passed the Senate yet.

“What we are trying to do is make sure they don’t hit us [with] lower standards like they’ve done,” Olson said.

High ozone can negatively affect respiratory, cardiovascular and reproductive functions, according to Thomas.

“The people that are most at risk are children and the elderly, people who have pre-existing respiratory illnesses, [and] people who may have compromised health in general,” Thomas said.

Ozone is not the only concern in terms of air quality. According to the ALA, Houston was ranked 16 out of 184 metropolitan areas for annual particle pollution, which involves the dirty, smoky particles that come from the stream of exhaust emissions. These particles can cause serious health effects.

Harris County’s average daily density of fine particulate matter is the highest of any Texas county, according to data from the Robert Wood Johnson Foundation, a health care nonprofit.

The ALA cites evidence that shows particle pollution can increase the risk of heart disease, lung cancer and asthma attacks. Raun said high levels of particulate matter have been linked to cardiac arrest, difficulty breathing, respiratory issues and mortality.

“During Harvey, a lot of the chemical plants—the refineries—actually shut down,” Thomas said. “When plants like that shut down, it brings them outside of their normal operating conditions, which actually make them more at risk for increases in air pollution.”

Whitworth said despite the progress Houston has made, its inability to meet standard for ozone shows other solutions need to be looked at.

“There’s no silver bullets left here, we really have to look at just everything across the board,” Whitworth said. “So much has already been done in industry now, sometimes now we are really looking a lot more closely at our vehicles.”

While industry-heavy areas are more prone to poorer air quality, according to a 2005 study from The University of Texas School of Public Health, sprawling suburban areas like Katy are showing increased levels of ozone.

As Katy continues to grow, its vehicle emissions are sure to increase as well, according to local researchers.

One project involves the Texas Department of Transportation’s planned widening of the Grand Parkway. TxDOT predicted usage on the toll road from I-10 to FM 1093 in Katy would increase by about 54 percent in the next 18 years. In an effort to prepare for mobility challenges coming to the region, H-GAC representatives on Feb. 6 proposed a 2045 Regional Transportation Plan to the Fort Bend County Commissioners Court.

Alan Clark, H-GAC’s director of transportation planning, said the majority of the population growth is anticipated to take place outside of the Grand Parkway and Beltway 8 region, directly affecting Katy.

“What this means is our trips that we see every day-commute flows-from outside of Grand Parkway into the Beltway 8 region are going to triple,” H-GAC’s principal transportation planner Vishu Lingala said.

According to the mayor’s task force study, areas located next to major transportation corridors are more vulnerable to increased levels of ozone. Katy’s proximity to road construction projects poise the community to be more susceptible to decreased air quality, and also fits Whitworth’s narrative as to why growing suburban areas are becoming more affected by increased ozone levels.

Among the TCEQ’s programs to help improve air quality is its voluntary Texas Emissions Reduction Plan, which helps companies and government agencies apply for funding for cleaner vehicles.

“That’s one of the ways that we can approach this, is through addressing mobile source pollution and helping get businesses and governments on board with cleaner engines,” Thomas said.

While proposed solutions are in the works, such as Olson’s bill and programs the TCEQ offers, experts said making changes at the local level are just as important. For Whitworth, it is as simple as carpooling.

“We are developing more suburban systems…we need folks to learn to change their way of thinking,” she said.