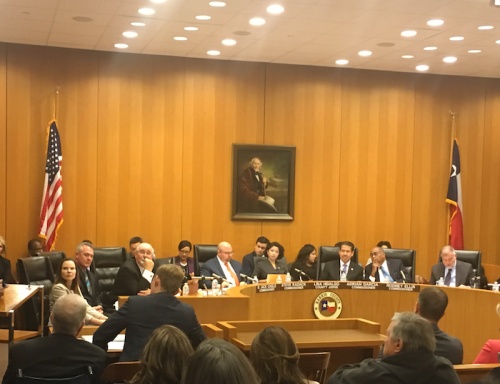 Harris County commissioners took the first step Jan. 8 in a process to evaluate whether the county should use Election Day voting centers in future elections.

If approved by commissioners the county would also need to get permission from the Texas Secretary of State before switching to voting centers, Harris County Clerk Diane Trautman said. Election Day voting centers are used in 52 other Texas counties, she said, including Travis County and Collin County.

The Jan. 8 commissioners court meeting was the first meeting led by new Harris County Judge Lina Hidalgo, who defeated former Judge Ed Emmett in November. It was also the first meeting since Trautman took over her role after winning a November election against former Clerk Stan Stanart.

Trautman, who expressed support for Election Day voting centers at the meeting, said the issue was something she campaigned on last year. She said the change led to increased voter participation in other places it has been implemented.

"Prioritization is on convenience for the voter," she said at the meeting. "You can vote at your neighborhood precinct location, or where you work, shop or go to school."

Trautman said if the county did move forward with the transition, it would be best to start with a smaller election, citing the upcoming school board elections that will be taking place within several county school districts in May.

Trautman proposed leaving all 700 Election Day polling locations open for at least the first few elections. Over time she said the county can look over voting patterns to determine if polling locations should be consolidated or relocated.

"I cannot emphasize enough, we would check with the community before consolidating any existing voting locations," she said. "We’ll go to that community and ask them what they think. If they don’t want to consolidate, it stays open."

Around 30 residents and representatives from community groups signed up to speak on the voting center proposal at the Jan. 8 meeting. Proponents said the centers would likely increase voter turnout while reducing the number of people who are not able to vote because they went to the wrong polling location and could not get to the proper one before polls closed. Other speakers cautioned about possible unintended consequences when it comes to consolidating polling places.

Commissioners Jack Cagle and Rodney Ellis both emphasized the importance of keeping the public engaged and making sure any consolidation of polling places does not catch people off guard or disenfranchise voters. Ellis said he did not want the focus to be on saving money when debating a consolidation.

"Democracy is not inexpensive," he said. "I don’t look at this so much as a way to save money. We need to spend more money or do something different than what we have been doing to get people out [to vote]."

Other concerns revolved around polling places that could see a large influx of voters once opened to the wider public, and the lines that could form as a result.

In other news from the meeting, which lasted nearly 7 hours, Hidalgo said she would like to re-examine ways to improve transparency of the court's actions for the public, including how agendas are posted as well as where and when meetings are held. The aim, she said, is to make meetings less of a burden to attend for residents and to address the issue of overcrowding in the meeting room.

Commissioners also discussed ways to ensure the equitable distribution of funding for flood mitigation projects—approved as a part of a $2.5 billion bond referendum in August—so high- and low-income neighborhoods were being given the same consideration.
SHARE THIS STORY