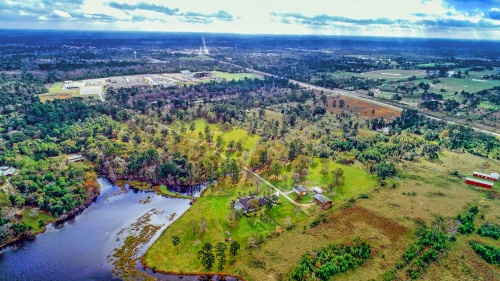 Lone Star College System officials announced the purchase of land in January for the future LSC-Magnolia Center site on FM 1486.

Magnolia residents can anticipate the opening of Lone Star College-Magnolia Center, a satellite of LSC-Montgomery, in fall 2021 after more than four years of planning.

“We must’ve looked at 20 different pieces of land trying to find the right place,” she said. “There was always one thing or another that just wasn’t right—price, location, relation to flood plain.”

Riley said traditional general education courses—including biology, English, math and government—will be offered to students who could then transfer to a four-year university or transfer to receive an associate degree. The center will also offer workforce certification programs, but details are not likely to be nailed down until summer 2020, Riley said.

In the meantime, officials with Magnolia ISD are already expressing optimism about potential partnerships.

“We think it’s an exciting component for Magnolia and Magnolia ISD to have an actual center within the community,” MISD Superintendent Todd Stephens said. “The Magnolia Center has been long-awaited.”

Riley said LSCS has maintained plans for a Magnolia Center ever since voters in MISD elected to join the LSCS taxing district in 1998. After that election, homeowners within MISD boundaries began contributing funds to the system through property taxes.

“They saw themselves as a growing community with the need for higher education because of the population growth around there,” Riley said.

LSCS locations typically serve students within a 10-mile radius, Riley said. The two LSCS campuses closest to Magnolia are LSC-Tomball and LSC-Montgomery, she said, but both are more than 10 miles away from Magnolia.

LSCS centers are satellite campuses that serve as extensions of full campuses. Typically smaller than a full campus, centers provide classrooms and basic student services, according to LSCS information. The last center that opened in the Tomball and Magnolia areas was LSC-Creekside Center, which opened in January 2016.

Steve Hoffart was a member of a LSC-Montgomery community advisory group—made up of Magnolia residents and business and community leaders—that met in 2015 to begin discussions on the center.

“For years, [Magnolia residents] have had to travel to Tomball and The Woodlands to take part in the Lone Star College System, including my own children,” said Hoffart, owner of Magnolia Pharmacy. “Having that opportunity in Magnolia is a tremendous opportunity for young adults and older adults that want to further their education and open up new career pathways.”

Systemwide enrollment growth has also contributed to the need for the center, Riley said. More than 89,000 students were enrolled at campuses in fall 2018, an 8 percent increase since 2013, LSCS data shows.

More than 15,000 students enrolled at LSC-Montgomery in fall 2018—a number not projected for the campus until 2025, according to a January report by the Texas Higher Education Coordinating Board, which studied enrollment trends from fall 2013 to fall 2017.

In total, 1,865 students within MISD enrolled in LSCS campuses and centers this spring, according to LSCS data.

“The availability of that [LSCS] site to both of our high schools will be almost ideal. Having that proximity [to Magnolia West High School] enhances the site and allows more accessibility for our kids,” Stephens said.

Officials with LSCS and MISD plan to strengthen the already-existing partnership between the two entities when the new center opens, Riley said. MISD has offered dual-credit classes at LSC-Montgomery since 2016.

The center will also offer select workforce programs to address the skilled workforce shortage in Magnolia as well as general education courses, according to a Jan. 22 LSCS news release.

Middle-skills jobs are those that require some education and training beyond a high school diploma but less than a bachelor’s degree, according to the Texas Workforce Commission. Riley said teaching these skills will be a priority at the center.

“There’s a pretty big middle-skills gap in the labor force in the Houston region, including the Magnolia area,” she said.

Riley serves on the Conroe Economic Development Council, which is expected to commission a middle-skills gap analysis for Montgomery County by 2020 to see where skills are lacking.

“[The analysis] will show where the job demands are, and we can serve to that [at LSC-Magnolia Center],” she said.

Additionally, commercial truck driving was among the occupations TWC projected to add the most jobs in the region from 2014-24, adding 9,740 jobs.

“Our business owners and managers in the community are reporting that they have difficulty filling skilled jobs,” said Sandy Barton, president of the Greater Magnolia Parkway Chamber of Commerce. “I believe Lone Star College is going to help us close that gap.”

Society of Samaritans President Shirley Jensen said the nonprofit plans to partner with LSCS to offer GED classes, which would allow for technical training or certifications for more residents.

“[Our clients] will have easy, affordable access to get a better-paying job so they will need less assistance with their living expenses and basic needs,” she said. “If they obtain marketable skills, training, and workforce degrees and certifications, doors will be open wide.”

Each LSCS center usually has a focus, Riley said. For example, LSC-Conroe Center has a welding, machining and automotive focus. However, Magnolia’s focus is still to be determined, she said.

Public opinion from these sessions will be combined with the middle-skills gap analysis to determine the best course offerings for Magnolia, she said.

“[A focus] really is driven by the community’s desire and what the employment opportunities are,” Riley said.