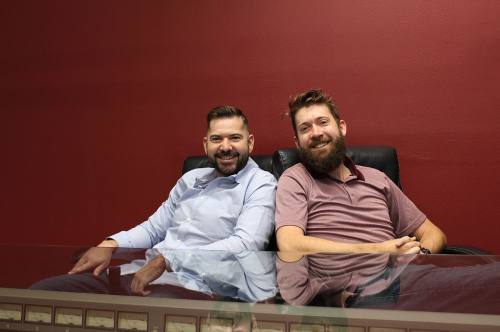 Brothers Chris and Jeff Wohrer took ownership of their late father’s business just over 10 years ago as his health began to fail.

“[Our dad] wanted to offer high-quality, fast-turnaround production to these guys,” he said. “We were doing next-day delivery on radio commercials in 1988 using FedEx Air, which was kind of an unheard of thing at that time.”

“Tomball just seemed like a really good fit. The whole city is gung-ho on the progress of Tomball,” Chris said. “They’re actively trying to assert themselves and make [Tomball] a strong part of the Greater Houston area. We identify with that.”

Jeff said the two worked with neighbors and the city to make sure Moffett Productions would be a good fit.

“We presented a plan to all the neighbors. ... They all showed up and supported us [before City Council],” he said. “It really had that small-town feel.”

Chris and Jeff renovated an abandoned warehouse to feature recording studios and a sound stage with services ranging from facility rentals to full-production capabilities.

“We like to say we do anything with a camera or a microphone,” Chris said.

As the two work to continue their father’s legacy, Chris said he hopes to bring more film projects and music videos to Tomball.

“[This facility is] a rebirth in a way,” Chris said. “We had a place in time that was the old Moffett, and this symbolizes the new Moffett. We can take everything that was great about the old Moffett and what got us here, and now we can really make it into a bigger and better place.”