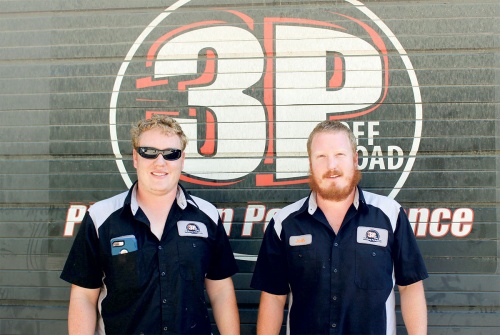 Brothers Travis (left) and Josh Herzing own 3P Offroad and helped with water rescue operations during Hurricane Harvey in August.

“It was just one of those hobbies that came to life one day,” Josh said. “We do everything here in-house for the most part. … I think what makes [us] different is we are so broad in what we do.”

Having an interest in vehicles, the brothers acquired a 5-ton army truck from an auction about two years ago, Josh said. However, the truck was lightly used until the Northwest Houston area sustained major flooding in spring 2016, and the Herzings began helping displaced residents.

“It was just something we kind of did because we had the truck [that could go through water],” Josh said. “We finally had a use for it.”

When Hurricane Harvey brought floodwaters again to the Greater Houston area in late August, 3P Offroad deployed the army truck, rescuing 35 residents from a Telge Road neighborhood. Josh said as residents were dropped off at a nearby H-E-B, the 3P crew spoke with Lt. Gov. Dan Patrick, who spread the word about the team’s rescue operations.

“When we came back [to our shop], there was probably about 100 people standing outside ready to help,” he said.

As Harvey hovered over Houston, the 3P crew set up a command center at the Tomball site and helped out in neighborhoods from Rockport to Beaumont, Josh said.

He said volunteers came from across the U.S. to help with 3P’s operations, bringing more than 250 boats, vehicles, supplies and food.

“We didn’t think it’d be that big,” Josh said. “We just kind of went out to help some people.”

After Harvey, volunteers set up shop in a nearby house, maintaining the mobile command center for 20 members of the 3P crew helping with Hurricane Irma operations in Florida.

“[The volunteers] just wanted to keep doing it,” Josh said. “It was just a crazy experience.”