Conroe ISD is expected to apply for participation in a new state-funded compensation program supporting effective teachers at hard-to-staff campuses this spring, according to an update on the plan provided to the district board of trustees Feb. 23.

The Teacher Incentive Allotment, created and funded through House Bill 3's passage in 2019, would provide additional funding of between $3,000 and $32,000 to certain designated instructors at more than a dozen Conroe ISD campuses with a majority of economically disadvantaged students. Paula Green, CISD director of human resources, said during the board's Feb. 23 regular meeting that the plan—if approved—will allow for additional support of top teachers and students in need.

"By going through this process and putting a plan in place, we’ll be ensured to be able to have more of an equitable distribution of effective teachers across our district," Green said. "What we’ve deemed to be our goal is we want to recruit, retain and reward the best teachers at our campuses with the highest needs. And along with that we want to encourage professional development and growth of our teachers."

Teachers would be eligible for the incentive by earning one of three designations through either the National Board Certification process or through a district-specific pathway. Those teachers could then receive additional compensation at schools with 70% or more economically disadvantaged students.

Final details on the district's plan will be shared at the board's March regular meeting before potential submission to the state in April. If approved, Green said compensation could begin in early 2023 after designations and data gathering are completed through the 2021-22 school year. 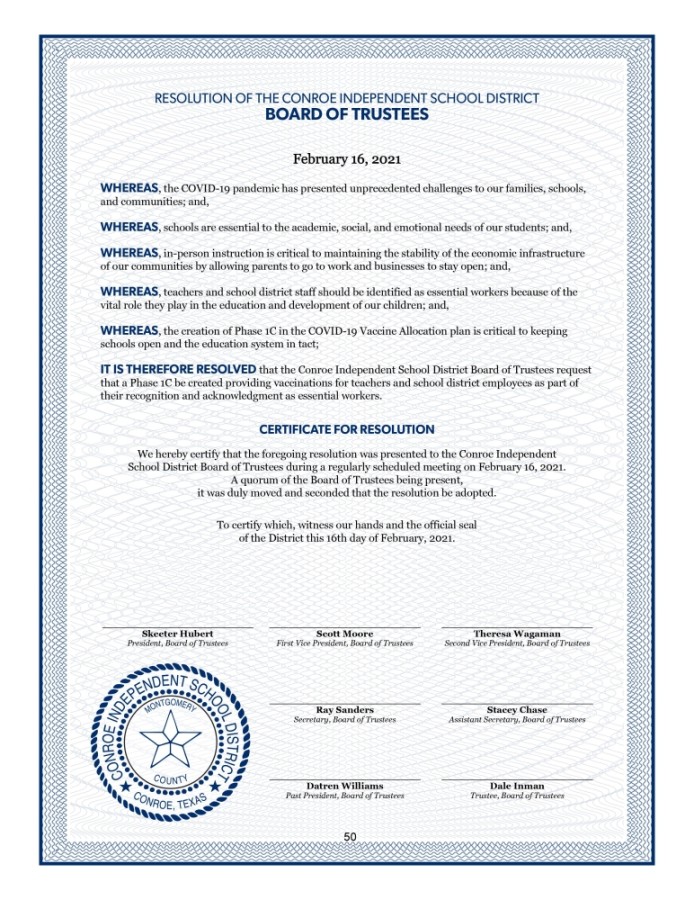 Prior to hearing Green's update on the incentive plan, trustees unanimously approved a resolution presented by board President Skeeter Hubert asking that a new vaccine eligibility group be created for teachers and district employees to give them priority after the existing Phase 1A and 1B sections focused on frontline workers, those over 65, and those with underlying health conditions.

"This entire time, I’ve been hearing our leaders, nationally and through the state, call our teachers heroes ... but yet, when the vaccine comes out, you’ve got to wait in line like everybody else," Hubert said. "I’m not trying to be critical, but it bothered me, and it bothered us as a board that there was no action behind the words that were being provided."

Hubert said the resolution, which was unanimously adopted by trustees, also has the support of county and state legislators. The resolution was not directed at a particular person or state entity, although the Texas Department of State Health Services has been responsible for crafting the state's vaccination phases so far.

Later in the meeting, the board approved spending on several construction and supply items. First, guaranteed maximum price amendments of around $145 million for the next phase of improvements at Conroe High School and $29.63 million for a new elementary school in the same feeder zone, were both approved and are funded through the district's 2019 bond.

Additional awards approved by the board include $650,000 for furniture to fill Hope Elementary School ahead of its opening later this year, $2.4 million for a 12-school technology update, and $700,000 for musical instruments and supplies. Funding for those items will come from the district's bond, capital projects and general fund, respectively.

“These are proactive measures," Superintendent Curtis Null said. "This constant reinvestment in our facilities is why our facility fared so well through this last storm, that we don't have parts that get worn out to the point of failure and we couldn’t be ready to open school. ... It does absolutely pay dividends for us.”