Economic Outlook Conference focused on growth, sustainability in The Woodlands 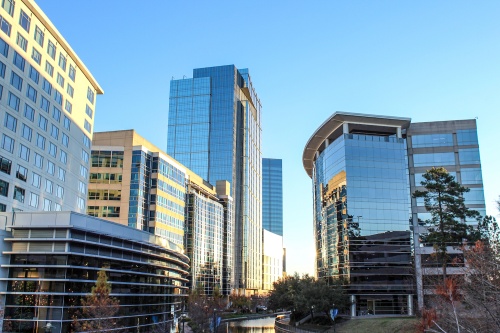 The annual Economic Outlook Conference was held at the Woodlands Waterway Marriott Hotel and Convention Center.

Following a year of growth and development in The Woodlands area, long-term sustainability was the main focus at The Woodlands Area Chamber of Commerce’s annual Economic Outlook Conference Feb. 8.

Gordy Bunch, chairman of The Woodlands Township Board of Directors said increasing hotel tax revenue and lower property tax rates in The Woodlands contributed to decreased debt and healthy savings for the township.

Bunch said the township is now focused on attracting tourism and generating revenue from hotels and visitor spending. The Woodlands continues to advertise itself as a destination, he said, adding that around 4,100 people are now employed in the tourism industry within The Woodlands. Visitors spent around $371.7 million in The Woodlands in 2018, Bunch said.

One of the main issues on the horizon in The Woodlands will be the township’s ongoing incorporation study, Bunch said. He said officials are in no rush to complete the research phase and want to keep residents involved in the process ahead of a final vote.

“We know that this is a complicated issue that takes a lot of interaction with our community,” he said. “I wouldn’t be concerned that this will be on a ballot any time soon. We are still getting through the details and we want to have additional public forums and opportunities to meet with our constituents to make sure they’re fully aware and understand the process.”

Laura Lea Palmer, vice president of business retention and expansion for The Woodlands Area Economic Development Partnership, said The Woodlands added more than 1,000 jobs in 2018, part of a steady 15-year trend of job growth in the township. In 2004, Palmer said The Woodlands area was home to 47 major employers with around 17,200 non-retail jobs. This year, 73 major companies now staff more than 38,000 jobs in the area, she said.

“The Woodlands has been building a sustainable model really, truly since its inception,” she said. “Many of the companies that we talked about and many of the ones that are represented here today are the reason that this community has built that kind of sustainable growth, and I think we will see that growth continue into the future.”

The Woodlands’ major employment sectors are now energy, comprising 27 percent of the township’s jobs; healthcare, which makes up 24 percent; and education and professional services, which each represent 16 percent of the market, she said.

In 2004, professional services was the largest employment sector in The Woodlands with 23 percent of the jobs, followed by energy at 22 percent, education at 17 percent and healthcare at 15 percent, Palmer said.

Jesse B. Thompson III, a senior business economist with the Houston Branch Federal Reserve Bank of Dallas, said a course correction could play out around the Houston metro region and likely the state this year.

“Less wind in our sails means that we’re going to go from a slightly above-average year … to a slightly below average year,” he said. “Not the end of the world, not a recession; that doesn’t seem to be in the cards at this point. But slowing down nonetheless.”

Thompson said that 2018’s growth will likely be a continuing trend, but at a reduced pace this year. He cited the drop in oil prices through the winter, the decline of chemical sector construction, a tighter labor market and forecasts of a slowing in both the U.S. and international economies, in addition to reports from local businesses.

“One of the key reasons that we know things are slowing down is because we get feedback from y’all,” Thompson said. “There are fewer tailwinds ahead.”