The Woodlands poised as next ‘Medical Center of the north’ 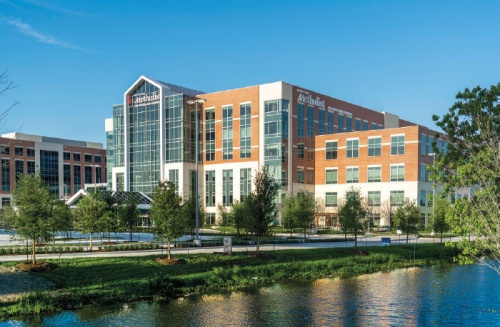 Health care has long been one of the fastest-growing industries in the Greater Houston area, and with The Woodlands’ rising population, a high rate of insured residents and a steadily increasing number of seniors, officials said the community has positioned itself to be the next major medical center.

As of 2017, The Woodlands is home to five major hospitals, resulting in a growing medical hub with more specializations and clinical programs for residents in the surrounding area, health care officials said.

Gil Staley, CEO of The Woodlands Economic Development Partnership, said in addition to existing facilities, the two newest hospitals—Houston Methodist The Woodlands and Texas Children’s Hospital The Woodlands, both of which opened last year—were a direct answer to the area’s population growth and demand for services.

“The hospitals are addressing the need based on population growth, and for that we have benefited as a community,” Staley said. “[It] gives us a base for acute health care in the area.”

Health care in The Woodlands has been the fastest-growing insdustry, with the number of health care employees in the area doubling over the last five years. The industry accounts for nearly a quarter of all jobs in the area, according to the EDP.

According to the Greater Houston Partnership’s 2018 Houston Employment Forecast, three main factors have influenced the demand for health care: a growing population, an aging population and the higher availability of health insurance.

Staley said The Woodlands area in particular has seen an influx of health care options due to more jobs bringing employers and residents to Montgomery County.

“We feel that health care [availability] is almost a trickle-down effect when you bring jobs and residents to an area,” Staley said. “They’re answering the call for the rapid growth that we’ve experienced.”

According to the ACS, The Woodlands’ population has grown by 10 percent from 2012-16. The area’s senior population—which is more likely to need medical care, according to Fulin—has increased from 9,924 residents age 65 years of age or older in 2012 to 12,646 residents in 2016, a 27 percent increase.

“It’s an attractive market because it is a growing market,” Fulin said. “You’re seeing more and more companies moving in here. People want to work here, and people want to live here.”

Job growth has also made the area attractive because it means the area is more financially viable for hospitals to build in, Staley said.

The number of residents with health insurance in The Woodlands is estimated to be 93.6 percent, according to the U.S. Census Bureau’s American Community Survey, compared to the 79.4 percent state average, according to the Texas Medical Association.

“Think about the heavily insured patients that they see here based on the types of jobs that we attract—professional jobs, very well-paying jobs and jobs that come with great benefits for their employees,” Staley said. “That also contributes to the success of acute care hospitals and doctor’s offices.”

“We have been tracking the number of patients from The Woodlands and Montgomery County area having to travel to our Texas Medical Center,” Johnson said. “The number of families that were having to leave reached a point to where we felt like we owed it to this area and the patients traveling to us to provide that level of pediatric care close to home.”

A result of the area’s large health care base is a broader selection of services and treatments than the average community, which help to bring more patients to the area, health care officials said.

In addition to new hospitals, existing facilities in The Woodlands area have also introduced new programs and specializations in the past year to give residents options for advanced treatments close to home.

Additionally, the hospital became a designated Level III neonatal intensive care unit hospital last September, and a Level II trauma center in January, which Urban said he believes has been a benefit for the area.

“It’s great because the Greater Houston area has been very underserved from a major trauma perspective so it’s nice to have a Level II trauma program here,” he said.

Fulin said Houston Methodist has also been growing and evolving since it opened last year, as many people are demanding more specialized services, such as oncology and neuroscience. The hospital also opened a breast diagnostic center last March.

“We had to make a significant investment, some of that being a comprehensive cancer center so patients can get radiation treatment here locally instead of having to go down to the medical center,” Fulin said.

Fulin said the goal of Houston Methodist is to offer comprehensive, full-spectrum programs that include world-class cardiologists, diagnostic intervention, electrophysiologists and the best equipment to bring in patients from around the world.

Texas Childen’s Hospital The Woodlands has also been working over the past year to offer a comprehensive selection of pediatric specialties to the community.

“We have specialties in cancer and hematology, cardiology, dermatology, diabetes, plastic surgery and [more],” Johnson said. “You name it, we have just shy of every specialty you can think of.”

Johnson said the hospital has future plans to add on new specializations and developments in the future. A neurosurgical clinic was added on last month, which gives patients a chance to receive treatment closer to home rather than going to the Texas Medical Center. Also, a new expansion project is in the works for the hospital, which is set to be completed in early 2019.

“Because of the need up here, we are already underway with a capital construction project,” Johnson said. “We will add 14 additional acute care beds, which will be available in January 2019.”

Fulin said with so many options in the Greater Houston area, hospitals in The Woodlands have diversified to attract  more patients and keep them from traveling to the Texas Medical Center.

However, he said believes diversification and competition for patients among hospitals has been beneficial for the area, forcing health care providers to offer a more diverse range of treatments and services.

“There’s a lot of positive activity going on here. I think the competition here as you see it becoming a Medical Center of the north, it makes everybody better,” Fulin said. “Everybody keeps stepping up their game, and I think it’s just great for the community as a whole.”

Drivers along I-45 in The Woodlands will likely notice the area’s medical center when they see it, as three of the area’s five hospitals can be seen from the road. Even as developable land in the area approaches build-out, officials said the industry likely will not reach capacity anytime soon.

“I think you’re going to see less differentiation between The Woodlands and Conroe when you’re driving on I-45,” Fulin said. “It’s going to get developed out; you’re going to see all the health care systems continue to expand out to meet the need of those individuals.”

MD Anderson Cancer Center, which has a large campus in Texas Medical Center, announced in June 2017 it plans to build a 20,000-square-foot outpatient clinic on Hwy. 242 in The Woodlands, giving cancer patients a location for clinical and diagnostic services.

Officials with MD Anderson said they estimate the new facility will open in mid-2019.

As health care options continue to grow, Patrick Jankowski, senior vice president of research at the GHP, said more efforts will be made to control costs to keep growth sustainable.

“[Health care] is going to continue to grow but you’re going to start seeing continued efforts of controlled costs,” Jankowski said. “It used to be you just go to the hospital or the doctor’s office, and now there are so many different ways to receive health care. The good thing about this is that it’s made it very competitive, which gives you more options.”