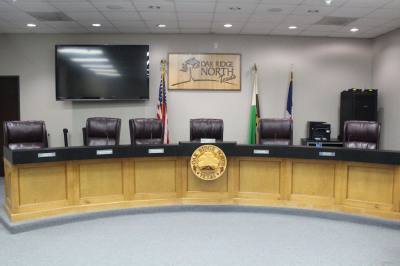 City development and infrastructure updates were among the topics discussed at the Oak Ridge North City Council Sept. 23 meeting, in addition to several residents' comments related to local flooding in the wake of Tropical Storm Imelda.

The council meeting opened with public comments about flooding in homes and properties in residential areas south of Robinson Road and east of the I-45 frontage road. City officials agreed to work with residents to clear some larger debris from the area and suggested making damage reports to Montgomery County.

“I feel for all y’all, and please don’t think that we don’t want to do anything about it, but it’s a matter of economics at this point for the city. And if we had the manpower to send somebody over there and help you all out, I don’t think anyone here would have an issue doing that,” said Mayor Paul Bond. “Let’s … see if we can’t do something to give you all some assistance.”

Officials also referenced potential future flooding relief from the planned construction of a detention pond in the area on Spring Pines Drive, which is expected to be designed and completed within two years. The city received an $840,000 federal grant this summer for the basin’s construction.

“We just got the cash, and we have all intentions of doing that,” said Council Member Clint McClaren.

After addressing the recent flooding, council moved to its regular business, including consideration of two potential annexations within the city’s extraterritorial jurisdiction; changes to the city’s schedule of fees; and the designation of representatives for the Houston-Galveston Area Council's 2020 General Assembly. Through an ordinance, Bond and McClaren were named the H-GAC representative and alternate.

The annexations—one for a property on Robinson Road and the other for a drainage channel along Robinson Road—were both supported by council. The first property owner submitted a petition for annexation, while Drainage District No. 6, which owns the channel, is expected to submit a similar petition later this fall. City Attorney Chris Nichols referenced how state legislation passed this year changed the annexation process to require additional steps between the city and applicants.

“Once you accepted a petition for annexation, we would proceed with publishing a preliminary service plan, which is just a list of all the city’s services that it will offer to the property once it’s annexed,” Nichols said. “Now, the code requires that we negotiate or present the city services to the applicant and that we actually have to sign a service plan agreement.”

City Council unanimously approved the property petition and directed Nichols to present draft service plans to the applicants before setting a public hearing on the issue in late October. The channel petition could be submitted following the drainage district’s October meeting and may be considered alongside other proposed Robinson Road developments in the area.

Council then approved rate increases, including a $5 raise in hourly rates for nonresident pavilion rentals at city parks, a raise to the city’s waste collection fees to $15.35 per month and a $6 charge for additional waste and recycling carts.

Also considered was a change order for the final phase of the city’s Texas Water Development Board-funded projects that would reduce the scope of sewer pipe bursting work. Director of Public Works Joe Sherwin said the reduction would remove one of four sections of piping from the city’s current plans, to be addressed at a later date as the city ETJ continues to develop. The reduction was unanimously approved and will save more than $24,000 and prevent the use of city funding for the project.

“It’s not going to be a detriment; it’s actually just going to stay the same,” Sherwin said of the final portion of pipe. “We’ll just have to get that at some future project so that the capacity, when we get to full capacity out in the ETJ, that that trunk main is enlarged up to the size that will handle the entire ETJ.”

Before recessing to a closed executive session, the council also approved an ordinance transferring nearly $202,000 in surplus general funds for fiscal year 2018-19 to the city’s reserve capital funds for use on future projects. Council took no additional action following the executive session.
SHARE THIS STORY