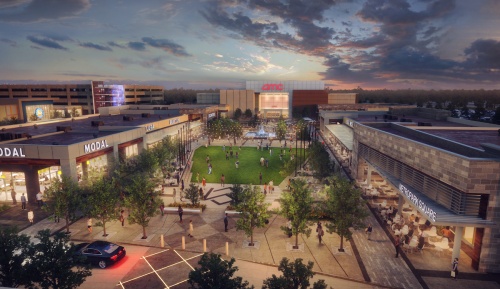 MetroPark Square's anchor AMC-10 is slated to open in March 2019.

MetroPark Square’s anchor, an AMC-10 located at 8870 MetroPark Drive, Shenandoah, is expected to have a soft opening in March 2019, AMC officials confirmed in mid-August.

In a letter to the city of Shenandoah requesting an extension of a special use permit for a mixed beverage late hours permit, John McDonald, executive vice president of U.S. Operations for AMC Theatres, stated the following:

“The ‘use’ of the theatre has not been established yet as the developer [Sam Moon Group] is still developing the property [MetroPark Square]. It is expected that the developer will turn over the property to AMC in January 2019. AMC then will install its [furniture, fixtures and equipment] and expects to have a soft opening of the theater in March 2019.”

The council previously granted an SUP for the AMC-10 in September 2017, which is set to expire Sept. 27, 2018. The request is for an extension until March 31, 2019. The 10-screen theater was initially expected to open in fall 2017 and was delayed once before with an anticipated opening in May 2018.

In a 4-1 vote, the council approved the requested SUP extension during its Aug. 22 meeting. Council Member Mike McLeod voted against the item.

Other confirmed tenants for the 69-acre mixed-use development include a 40,000-square-foot Dave & Buster’s, slated to open in February 2019, and a 160-room Hyatt House, for which an opening date has not yet been announced. MetroPark Square will also feature a 324-unit multifamily living project called The Residences at MetroPark.

The Residences at MetroPark will include one-, two- and three-bedroom apartments, two-story town homes, a two-level fitness center, pool, indoor and outdoor community center and retail on the entry level.