Missouri City City Council unanimously approved changing the name of Confederate Drive to Prosperity Drive on the first of two readings during its June 7 meeting.

The city received an application to change the street’s name, which included a petition signed by at least 70% of residents on the street. Missouri City City Council voted to lower the threshold of necessary signatures from 90% to 70% in summer 2020.

Council Member Jeffrey Boney said this application’s success is proof that lowering the signature amount was the right decision.

“The threshold to consider an item like this was at 90%, and that’s extremely too high,” Boney said. “I don't think that a lot of people really truly understand the impact mentally and emotionally of how those names and the memories of those incidents and names impact you.”

“Thank you guys for addressing this situation,” Darryl Gilbo said. “Honestly it’s almost like being a Black man living on a street that really degrades you. It’s almost like if you were sitting on the street with General Lee himself.”

Confederate Drive is bordered by Confederate Court and Confederate South Drive. While there is not an active application to rename these streets, Rhonda Gilbo said she believes these bordering streets will follow suit. City Council members can also submit a written request to change street names, city documents show. 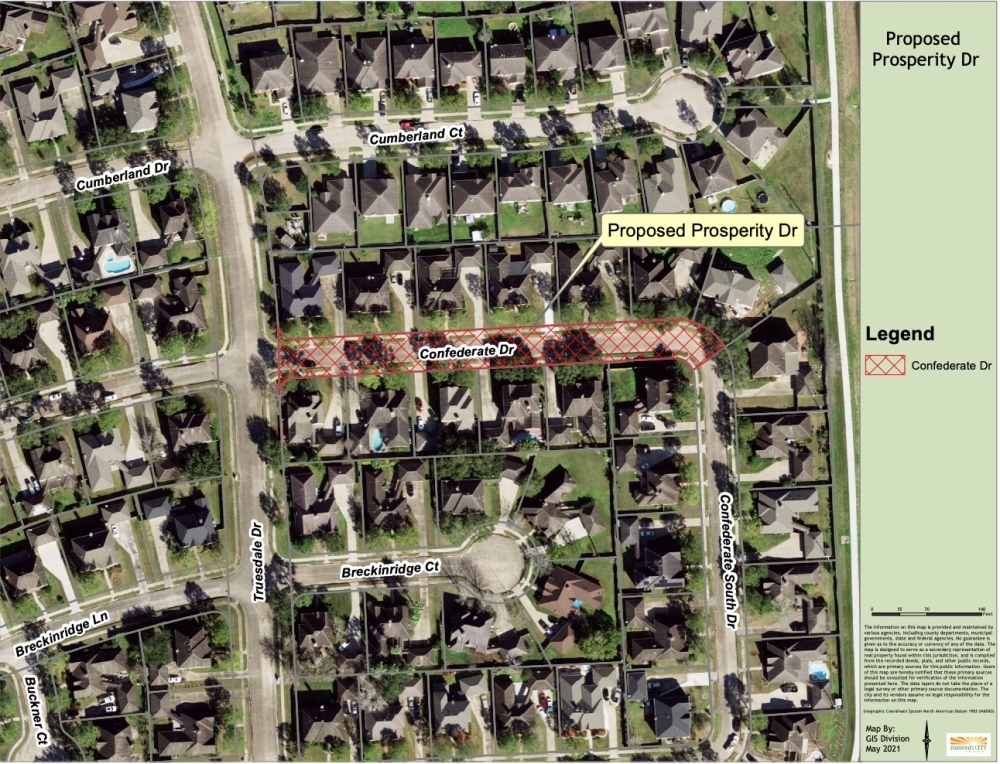 The cost of changing the street signs will be approximately $1,900 and will be paid by the residents that applied for the change, Director of Development Services Jennifer Thomas Gomez said.

Missouri City will notify the U.S. Postal Service and public entities such as the county and municipal utility districts of the street name change, but individual property owners will have to reach out to personal services, including home titles, the IRS and the Texas Department of Public Safety.

Missouri City City Council will take a final vote on renaming the street to Prosperity Drive at a future meeting.

“I’m actually happy that this has been brought forth for us to change this,” Council Member Vashaundra Edwards said. “It’s heavily offensive for us to have this type of street name still prominent in our city. I believe we are moving forward as a city as well as a country and the fact that we are changing these offensive names, I am just ecstatic.”