Need for apartments in Spring, Klein still on the rise after post-Harvey demand drops 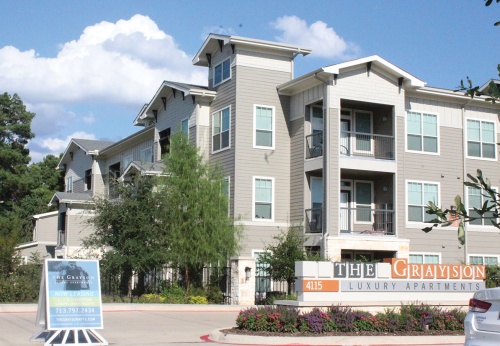 Just over a year since Hurricane Harvey devastated the Greater Houston area, experts say the demand for apartments from displaced homeowners in Spring and Klein is trailing off, but population pains and a burgeoning economy continue to fuel the market.

Prior to Harvey hitting Houston in August 2017, apartment occupancy rates in Spring and Klein were trending downward from 2016 due to a metrowide apartment glut, said Bruce McClenny, president of ApartmentData.com, a site that tracks apartment occupancy and rental rates.

However, from September 2017 to September 2018, average occupancy of apartments in Spring and Klein grew from 86.3 to 90.1 percent as the August storm forced many homeowners to seek temporary housing, McClenny said.

“Harvey kind of speeded things up economically for the apartment industry by about a year,” he said. “September through November, people were seeking out apartments to move into.”

McClenny said most homeowners are returning home following renovations, but some have chosen to remain renters due to extensive damage to their homes.

Patrick Jankowski, senior vice president of research at the Greater Houston Partnership, said although the boost from Harvey was temporary, overall demand is still rising thanks to job growth in the area.

“The market has tightened up. There are a lot fewer free rent concessions, fewer gift cards, fewer incentives being offered,” Jankowski said. “If you’re driving around town and you see signs for free rent, that’s a sign the apartment market is getting soft again.”

Experts said demand could continue rising in the next year or two, perhaps even outpacing supply, despite several new apartment complexes in the area slated to open in 2019.

McClenny said construction in the Greater Houston area has diminished following the oil and gas industry downturn in 2016 when the price of crude oil plummeted, which put the brakes on any new development. However, the apartment market could be in the beginning stages of another construction boom as developers are working to secure sites and permits, he said.

“There’s definitely a need for apartments. … Demand is picking up, and supply is muted or slow right now [and has been since 2015-16]. But the supply will be picking up in the next couple years,” McClenny said. “We need to have more apartments on a consistent basis. Our problem is we overshoot.”

McClenny said he knows of at least three apartment communities—Alexan North Point, developed by Trammell Crow Residential; a luxury apartment by Caldwell Companies; and Canterbury Development’s Oasis at Ella Boulevard—opening in Spring, Klein and nearby areas in 2019. A 200-unit townhome complex developed by FIG is also under construction on Gosling Road and is set to open in 2019, a representative said.

In this scenario, rent will likely rise as well, McClenny said.

“I think 2018 will be a fairly flat year of rent growth when you look at the whole market. In 2019, we’re going to start to see more growth,” he said.

Apartment rents in Spring and Klein have already risen since Harvey. From September 2017 to September 2018, average rental prices for all units in the area grew from $981 per month to $1,007 per month, according to ApartmentData.com.

“Harvey overall drove the rent prices up for apartments and private rentals. Now we are seeing prices dropping as [Harvey-related] demand goes down,” said Mark McNitt, a Realtor at Bernstein Realty who works with buyers and sellers in the Greater Houston area, including Spring and Klein. “Now that things are settling down and people are moving back into their repaired homes, we are back to normal growth in general … Prices likely will fall a bit or remain flat for the short term but will start to go back up as the surplus of rental properties are taken up by the ever-growing population in the area.”

In Spring specifically, the average rent rose 3.7 percent from September 2017 to the same month this year, according to Apartment List, a platform that connects renters with apartment listings. Spring’s year-over-year rent growth surpasses the state average of 1.8 percent over the same time period as well as the national average of 1 percent, likely due to Harvey, Apartment List’s Housing Economist Chris Salviati said.

“If you go back pre-Harvey, to June of last year, rent in Spring was actually down by 3.3 percent year-over-year,” Salviati said. “Then you’ve got a big post-Harvey spike … but I think it will level off when construction picks up.”

McClenny agreed that Harvey threw a wrench in the apartment market.

“Harvey just mucks it all up. It takes what you would consider a somewhat regular year, throws in 19,000-20,000 people coming into apartments … Because of this spike in demand there was a spike in rent,” he said.

Rising rent could pressure renters to find a cheaper alternative but likely will not affect overall occupancy, he said.

A burgeoning economy and job market in the Greater Houston area will likely spur an uptick in demand for multifamily housing, experts say.

“We are starting to see fairly strong [job] growth. As a general rule of thumb, you need six jobs to absorb one apartment unit,” Jankowski said.

From August 2017 to August 2018, the Houston metro gained 110,200 nonfarm payroll jobs, making it the fourth fastest-growing metro in the U.S., according to the U.S. Census Bureau.

“[This year’s job growth] includes a lot of construction jobs associated with Harvey. Once that starts winding down, job growth will be winding down, but we’re still on track to gain 60,000 to 70,000 jobs this year,” Jankowski said.

McNitt said he knows of several businesses in Northwest Houston that are driving job growth, such as Amazon’s fulfillment center on Ella Boulevard, which currently employs 2,000 workers and is expected to hire an additional 500, according to a press release from Gov. Greg Abbott’s office. ExxonMobil is another example, he said.

“Over the next year or two, the area should see an increase in demand as subsidiaries of Exxon[Mobil] move in from the Dallas area to The Woodlands as well as the recent opening of the Grand Parkway [segments F-1, F-2 and G in 2016], which allows more access to the area from Cypress and Northwest Houston,” McNitt said.

With more incoming jobs, McNitt said he believes people are choosing apartments for their location and ease.

“The convenience of apartments is what drives everything,” McNitt said, adding that affordable rentals gain more traction in the area than upscale residencies.

Harvey’s far-reaching effects changed not only the economics of the apartment market, but renters are now particularly wary of living in flood-prone areas, McNitt said.

“Renters ask us [Realtors] to pull up the Harris County Flood Control District’s website and see if the community they are interested in is located within a 100-year flood plain,” McNitt said.

Whether the apartment flooded during Harvey is often the first question potential residents ask when visiting Park Trails Apartments, Community Manager Eda Brooks-Hallgren said. Park Trails, a 210-unit complex near FM 1960 and I-45 North, did not flood during the hurricane,  she said.

“New renters are very concerned with the increased flood events in our area,” she said. “People are scared, and the people who are asking questions are not just people who have been impacted by Harvey, but people whose homes did not flood but are scared [it will] when the next one comes.”

Alongside flood-related concerns, Brooks-Hallgren said she believes renters are increasingly looking for quality and a sense of community.

“A few years ago, it was price—I want the cheapest thing,” she said. “I think renters are now realizing you get what you pay for.”

Rental rates at Park Trails Apartments have increased twice per year by $35-$45 per month in the past five years, Brooks-Hallgren said.

Park Trails has maintained 95-97 percent occupancy for the past five years, largely due to long-term residents  who have lived in the community for eight to 10 years, Brooks-Hallgren said. A few residents also moved in after their homes flooded during Harvey, she said, and 90 percent of the apartment’s traffic is resident referrals.

“We have residents that have moved out that will still refer prospects to us,” she said. “We have had young adults that lived here with their parents come back [years later] with their own families to move back in with us.”
SHARE THIS STORY