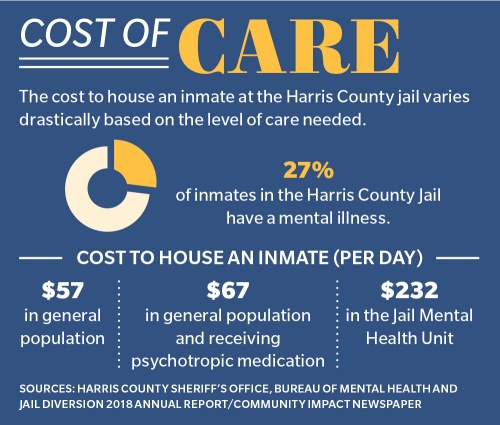 Mental health professionals at the Harris County Jail had nearly 190,000 contacts with individuals with mental illnesses and prescribed psychotropic medication to nearly 30,000 patients in 2018, said Frank Webb, the project manager of Harris County’s Bureau of Mental Health and Jail Diversion.

“It is a huge problem,” he said. “Jails and prisons have become the new mental asylums of the 21st century … [And] treating people with serious mental illness in jails is very expensive.”

In 1964, when Texas’ population was just 10.3 million, the state was home to 14,921 state psychiatric hospital beds. Today, despite its population nearly tripling to 28 million in that time, the state has reduced its number of state psychiatric hospital beds to just 2,432, according to the Harris County Bureau of Mental Health and Jail Diversion’s 2018 annual report.

With limited access to mental health care across the state, many individuals who suffer from severe mental health illnesses end up in county jails—including in Harris County. And with so few beds, the average wait time for inmate acceptance to a state hospital was 116 days in 2018, according to the report.

“We become a mental hospital by default, not by choice,” Harris County Sheriff Ed Gonzalez said.

With an average daily population approaching 9,000 inmates, the Harris County Jail is the third-largest jail in the U.S., Gonzalez said. Approximately 27 percent of its population—roughly 2,250 inmates—is on psychotropic medication to treat mental illnesses.

“On a daily basis, our jail has more inmates on psychotropic medications than any single mental health hospital in Texas,” Gonzalez said. “It’s a big portion of our population, and those medications are costly, and some of those [inmates] are on multiple medications and have been [in our jail] for months, even years. So it quickly adds up, and we—the taxpayers—are paying for it.”

“It’s better to try and get these individuals help for their mental illnesses [or] psychosocial problems rather than [having them] incarcerated in jail, which is really not the place to treat mental illnesses,” Webb said.

While the Harris County Sheriff’s Office has invested in its jail diversion programs and mental health care initiatives over the past two decades, local leaders have pushed for a study of the county’s criminal justice system and are turning to the 86th Texas Legislature for further improvements.

HCSO’s focus on implementing jail diversion programs and mental health care initiatives began with the opening of the NeuroPsychiatric Center, which provides care for jail inmates in mental health crisis, in 1999.

Since then, HCSO has ramped up mental health training for its officers, formed new teams to support those in crisis and opened new facilities to provide mental health care. HCSO spent about $22 million on mental health-related programs in 2018, Webb said.

“Those teams do a really great job working with our population,” Butler said. “They’ll transport them to detoxification centers, medical appointments—they’re really trying to help them. Some of them are hardly functional, and they just cannot function in a work setting. There’s no future for them if they don’t get help, medically, for their issues.”

Harris County Precinct 4 Constable Mark Herman said mental health training is one of the most important weapons his officers have in the field.

“All 500 of our officers are trained and take classes in mental illness every year to recognize those symptoms and help get people the help they need,” Herman said.

Most recently, HCSO opened the Judge Ed Emmett Mental Health Diversion Center in September where officers can take persons with mental illness who have been picked up for low-level, nonviolent offenses to get treatment—rather than languishing in jails waiting for a state psychiatric hospital bed to become available. The $7.5 million center was funded through grants issued by the Texas Health and Human Services Commission, according to officials with The Harris Center for Mental Health and IDD—the county’s mental health authority.

Within the first five months of opening, the center served 562 people, said Wayne Young, CEO of The Harris Center for Mental Health and IDD.

“We anticipate that number will continue to grow,” he said. “In Harris County last year there were almost 2,000 people arrested for trespassing who had a mental illness or a history of mental illness. So we know there’s a large number of people who we think are divertible and who really need help and treatment more than they need punishment and incarceration.”

HSCO is also in the final phase of its pilot telepsychiatry program. The program enables officers in the field to access clinicians via iPads when encountering someone the officer believes is mentally ill.

In hopes of capitalizing upon these efforts, local leaders, law enforcement and legislators are continuing to plan for the future.

In the 86th State Legislature, mental health is already at the forefront of many legislators’ minds as Texas Senate leadership increased the proposed budgeted state funding for mental health by $750 million to a total of $7.6 billion, as of Feb. 13.

Additionally, state Sen. Joan Huffman, R-Houston, filed Senate Bill 362 on Jan. 16 shortly after the start of the legislative session. It would allow criminal courts to issue outpatient treatment for inmates with mental illness who pose no risk to others and comply with court-ordered treatment, said Amanda Jones, the director of governmental relations for The Harris Center for Mental Health and IDD. As of March 14, the bill is in the State Affairs Committee.

Outside of the Legislature, Harris County Commissioners Court called for a comprehensive study of the county’s criminal justice system during its Feb. 12 meeting, which will look at strategies to reduce caseload backlog as well as case management best practices, changes in plea policies and possible expansion of prearrest diversion programs. County officials have not identified a timeline and cost for the study, as of late March.

“Our county jail is the largest mental health facility in the state,” Harris County Judge Lina Hidalgo said in a March 15 news release. “With new leadership in county government and in the courts, we have an incredible opportunity to enact bold changes to a broken criminal justice system that is hurting families and taxpayers.”

Young said The Harris Center for Mental Health and IDD, in collaboration with the Harris County District Attorney’s Office and the Harris County Juvenile Probation Department, also launched a pilot diversion program for youth in March. The program focuses on family violence calls in situations where mental health is a factor.

“Within 48 hours of that youth being taken to detention on a family violence call, our mobile crisis team is meeting with the family [along with] probation [officers] and DA representatives, to talk about a crisis plan so we can get them the help they need and ultimately avoid those charges,” he said.

Gonzalez said while progress has been made within the criminal justice system, he hopes to continue the momentum by cultivating more community partners to help individuals with mental illnesses even after they have left the system.

“We need to develop a stronger continuum of care so folks can be stabilized in the community,” he said. “We need to remove that stigma; we shouldn’t just criminalize [mental illness]. We need to treat it as a public health issue and get these people lasting help that can get them back on track.”