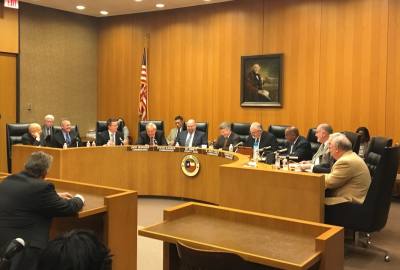 Two Harris County criminal court judges spoke at the Feb. 27 Harris County Commissioners Court meeting to urge commissioners to settle the court case that has resulted in a protracted legal battle over the county’s bail bond system for the past year.

The matter began with a lawsuit known as the O'Donnell case, filed in September 2016 and alleging the county unfairly jails those who cannot afford to pay cash bail. The suit alleged that a “wealth-based pretrial detention system” violates the equal protection and due process clauses of the U.S. Constitution.

Criminal Court Judge Darrell Jordan, who is named in the suit, addressed the commissioners early in the meeting, stating he felt the county’s expenditure of approximately $6 million on the court battle so far was a poor use of resources.

“There’s been no victory by these lawyers who are now going to be paid $6 million. A first-year lawyer could have done what they have done, which is essentially lost every argument,” Jordan said.

Jordan said the case should be handled by the Harris County Attorney’s Office.

“The most conservative appellate court in this country, strict constitutional conservatives, have said this practice that we are doing is unconstitutional. What do we continue to fight for?” Jordan asked. “I’m asking that you all cut this last check, fire these $6 million lawyers, let the county attorney’s office come, and we all sit down and work out a settlement.”

According to reporting by the Texas Tribune, the 5th Circuit Court of Appeals asked Rosenthal for a modified ruling, suggesting a procedure that would include a hearing for defendants unable to afford bail within 48 hours, during which time they can argue for bond that is lower or free of cost. Her original ruling called for the county to release misdemeanor defendants within 24 hours if they could not afford bail.

Responding to a question from Precinct 4 Commissioner Jack Cagle, Jordan said he would be willing to work Saturdays in order for the court to fulfill the requirement to hold a hearing within 48 hours for defendants unable to afford bail.

Criminal Court Judge Mike Fields also said he would be willing to work Saturdays and addressed the reasons he said the county should settle the case.

“We have to prioritize constitutional issues over statutory issues … that are not as important as a person’s right to affordable bail,” Fields said. “I ask that you use every tool in your arsenal to help us settle this case. I have been vocal about my feeling that we need to settle this. Our county needs to settle this for financial reasons, and our public needs it settled for reasons of good governance and confidence in the criminal justice system."

Harris County Judge Ed Emmett said he favored settling the case, but said the plaintiffs had not responded to offers made by the county.

“I’ve publicly said … if Judge Rosenthal would change her ruling to where this wouldn’t be a continuing get-out-of-jail-free card, I’m all for settling," Emmett said. "It’s my understanding that there are offers to settle that have not been responded to by the plaintiffs.”

Emmett said he agrees with the idea that poor misdemeanor defendants should not be jailed simply because they cannot afford bail.

“No person should be put in jail simply because they can’t afford bail, there’s no question about that,” he said.
SHARE THIS STORY

Humble ISD continues its search for virtual learning funds as the beginning of school approaches.