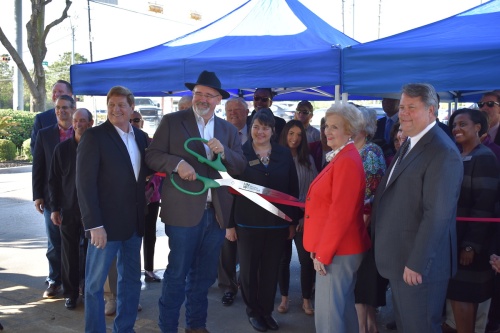 Cypress Creek Cultural District, which includes a library, museum and public performance space, is on the road to recovery from devastating flooding damage during Hurricane Harvey, and community efforts to rebrand the area with bold, bright metal signs at its perimeters gained momentum March 22 with a monument dedication at Cypresswood Drive and Stuebner Airline Road.

Bearing the inscription “Cypress Creek Cultural District,” the monuments let visitors know they are entering an area similar to Houston’s museum district, albeit on a smaller scale, said speakers at the event held by Houston Northwest Chamber of Commerce.

The signs are part of HNWCC’s ongoing Grow Northwest campaign, which aims to brand the region along Cypress Creek as culturally rich, diverse and attractive to business. A second sign is placed farther down Cypresswood Drive, near Spring Gully.

“When I look in your midst, you are the people that make this community work,” Cagle told those gathered at the event.

CCCD President Glenn Wilkerson said the signs will help to elevate awareness of the presence of arts facilities and parks in the community.

“There’s nothing like it in all of Harris County,” Wilkerson said of the cultural district.

While reopening dates have not yet been provided by the facilities, the museum expects to reopen in late spring or early summer, said PFMFA Director Ani Boyajian, who took over the role last summer shortly before the flood occurred. Its annual fundraising gala and 10th-anniversary celebration is scheduled for March 24.

The ceremony also included placement of a memorial plant and placard at the monument in memory of Ella Edmondson, a community member and chamber supporter.