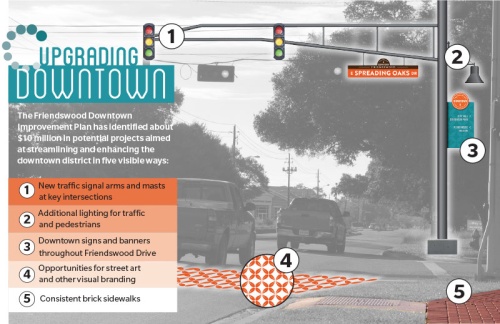 The Friendswood Downtown Improvement Plan has identified about $10 million in potential projects aimed at streamlining and enhancing the downtown district in five visible ways:

A revitalized city core with branded banners and street signs, landscaping, bike trails, and new lighting could come to Friendswood under its first Downtown Improvement Plan, approved by the City Council on Oct. 1.

The plan identifies around $10 million in potential projects. Some could be grant-funded, but with the Friendswood Downtown Economic Development Corporation limited to about $450,000 a year in sales tax revenue, the plan could take several years to bring to life, said Karen Capps, Friendswood’s economic development coordinator.

“It really depends on funding and grants,” Capps said. “There are some aspects, without any kind of grants, that would take up to 10 years.”

The 2018-19 budget for the FDEDC is $912,015, of which about $416,000 was carried over from the previous year. Capps said it is unlikely the budget will be entirely spent as other funding sources are being sought out.

With the City Council’s approval, the FDEDC will likely begin with projects in what the plan considers the “heart of downtown” at Friendswood Drive and Spreading Oaks Avenue, officials said. As these efforts take shape, a separate citizen-led effort to build a carousel downtown has officially ended.

‘Work with what’s there’

The improvement plan, developed over the past six months, is intended to serve as a framework for addressing needs and identifying opportunities, said Lauren Griffith, the consultant hired by the city in March to create the plan.

Projects could be prioritized based on funding, she said, but the initial layout puts the “heart” first, with an estimated $2.19 million price tag to repair and add brick sidewalks, add new traffic signal arms and masts, and improve lighting and landscaping.

“There’s more development coming there, a four-story office building, you’ve got the Friends church across the street, the library is there,” Capps said. “That’s where you are going to see some things happening.”

Another project would address the entry points at Edgewood Drive and Whispering Pines Avenue, where the plan calls for $1.33 million in improvements and branding. Updating the intersections at Clearview Avenue and Castlewood Avenue is expected to cost around $828,000.

Another significant effort would address sidewalks, curb ramps and lighting for pedestrians throughout the district, estimated to cost over $4.84 million.

“It’s going to take some years to have that money,” Griffith said.

However, the city is applying for $3.5 million from the Houston-Galveston Area Council’s Transportation Improvement Program, which could kick-start the overall effort. If approved, that amount would cover 80 percent of the initial project.

Griffith’s firm began the process by taking an inventory of the district, studying the city’s policies and infrastructure, and then it sought out public input. An online survey in May collected over 1,100 responses and found that residents’ top priorities were more dining options and more walkable sidewalks and intersections.

Follow-up meetings with stakeholders—business owners, community leaders and others with a vested interest in downtown—dug deeper into the expectations and ideas from the community, Griffith said.

“People told us in the process that they didn’t want anything to take away from it being quaint and historic, and at first that puzzled us,” Griffith said. “But as we listened more, we realized that what they are talking was the character, the warmth. Our challenge then was to manifest that.”

For Griffith, a landscape architect who has consulted on Houston’s Discovery Green as well as dozens of other projects throughout the Houston-Galveston area, that meant, in part, to work with the “urban fabric”—streamlining brick sidewalks, making the lighting consistent and inviting, and layering more trees to make the area feel smaller and closer.

“We are trying to work with what’s there,” Capps said.

A draft plan was shown at three public meetings for input and was formally approved by the FDEDC on Sept. 11.

“This is the closest we’ve ever been to having a real downtown,” said Brett Banfield, president of BMI Properties and the current president of the Friends of Friendswood Downtown Association, a group that organized in 2015 to advocate for the area.

Banfield said he can vividly remember an experience when his company brought a banker from New York to refinance a property. After driving down Friendswood Drive to meet Banfield, he almost changed his mind about the deal.

“He told me, ‘I didn’t realize this was a low-income area,’ because of how it looked,” he said. “That was eye-opening. Downtown never represented Friendswood very well.”

According to Adam Hill, president of Sterling Builders, which has built several projects downtown, the turning point came about 10 years ago, when the city established a downtown  neighborhood empowerment zone. That meant all development fees in the downtown district could be waived.

“I like the direction it is going in … a lot of this is a result of the city offering incentives and grants,” Hill said. “It’s been a stimulus for development, and it has been extremely effective.”

When Stacy Parsons wanted to build a new building for Lary’s Florist, which she owns, that meant saving about $20,000 in fees, she said.

“It was a good chunk,” Parsons said. “And now that I have my building, people are really happy to see it, they’re thanking me for adding to downtown. They’re asking for my color scheme so they can maybe match it.”

The waivers, coupled with $3 million in Galveston County Consolidated Drainage District improvements in 2009 that took away the need for on-site detention, cleared many of the hurdles developers faced, Capps said.

Grants are another way the city has supported downtown development. A city report on economic incentives identified about $200,000 going downtown, including $100,000 for Louis Tannos’ four-story office building.

This is a key role the government and the development corporation can play, Capps said.

“There’s a responsibility of the city … to make it more desirable, more walkable and make the economic improvement possibility achievable,” she said.

This new plan should continue that trend for the 150 property owners in the district and for any future property owner or investor, Capps said.

“It’s going to be a great investment. Being downtown is a big advantage,” she said.

If property owners choose not to develop, there is not much the city can do. For example, Banfield said, at one time, about 17 acres of downtown were vacant or unused and generated about $20,000 for the city in taxes.

“That should be generating half a million a year, if it were developed properly,” he said. “That’s what we want to see up and down Friendswood Drive: good development for the city, more property tax dollars.”

As the FDEDC moves forward, an unrelated downtown effort led by the FDFA has ended. Renewed efforts to build a $1.5 million carousel in Stevenson Park were officially called off by the Friends of Downtown Friendswood Association on Oct. 4.

“Unfortunately, the Carousel Park Project has become a far too divisive issue, which has undermined our mission and vision and placed undue burden on those who serve, work and volunteer in this great city,” Banfield wrote in a public statement on Facebook.

The project had $700,000 in donations committed to seeing it through, but organizers faced passionate opposition during the Sept. 10 City Council meeting. Several residents spoke out, questioning the carousel’s financial feasibility and the appropriateness of discussing park amenities at a time when residents have not fully recovered from Hurricane Harvey.

To make the carousel possible, the FDFA was seeking a memorandum of understanding with the city to begin negotiations over the use of a section of Stevenson Park.

At the time, Mayor Mike Foreman told Banfield to work on providing more details and gathering more public input before seeking an agreement with the city.

“We will answer every question we get,” Banfield said.

Regardless of the fate of the carousel, Banfield said in an earlier interview with Community Impact Newspaper the FDFA will continue to look for ways to support downtown. It has already put $260,000 into downtown businesses through its events, including the Texas Music Fest, in its fourth year, and its public art program has commissioned a second mural.

Eventually, these efforts could create another resource for improvements, such as a grant program to help businesses with renovations, Banfield said.

“If downtown becomes the economic engine it can be, it will help everyone,” he said.