Panelists: Startup innovation, data optimization should be at forefront of Houston’s health, oil and gas industries 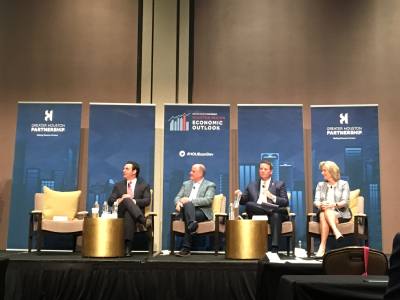 The health care and oil and gas industries must do a better job of innovating in Houston’s startup landscape, as well as leveraging and optimizing data to improve processes, industry leaders said in a panel session at the Greater Houston Partnership Economic Outlook Forum on Dec. 5.

Houston lags behind Austin in its status as a tech hub, and it has historically failed to attract high-tech companies such as Amazon, said Mike Potter, chief technology officer of Hewlett Packard Enterprise.

“While we are innovative in a corporate and institutional sense—our companies are innovative, our medical [facilities] and institutions are innovative—where we’ve been lacking is more in the startup innovation space,” said GHP’s CEO Bob Harvey, who gave an introductory presentation before the panel session. “[However,] we’re really starting to see some improvements and traction in Houston in this past year.

Two examples of such efforts are the new Midtown innovation district, anchored by the former historic Sears building, as well as the TMV Innovation Institute in the Houston Medical Center, Harvey said, which promotes health care industry collaboration. The former, which was announced in April, will bring together the area’s entrepreneurial, corporate and academic communities in a collaborative space, according to Rice University, a partner in the project.

Meanwhile industries across the board have touted significant technology improvements and an increasing influx of digital data, but these strides have not necessarily translated to better use of data.

“We as a society are creating twice as much digital data every two years than has ever been created since the beginning of mankind,” Potter said. “[HPE’s] goal is to actually tap into that data, so we’re in the middle of that transition, and I think it’s very important for every single industry to understand that data and how it works and what we can actually do with that data to transform industries and technologies.”

Panelists Cindy Taylor, president and CEO of Oil States International and Troy Villarreal, president of HCA Gulf Coast Division, also discussed unique challenges that each sector faces, from attracting and retaining young professionals in the oil and gas industry to making health care both affordable for consumers and profitable for hospitals.

Globally the drilling industry has heavily invested in equipment such as top drives, horizontal drilling and extended reach drilling technologies, and these efforts have paid off in drilling efficiencies—consequently benefitting Houston’s economy, Taylor said.

“When I started in this industry, on average we would drill a vertical hole both onshore and offshore maybe to 6,000-11,000 feet,” Taylor said. “Today, we may be going vertical 12,000 feet but we’re going out horizontally 14,000 feet … [and we’re] drilling these [horizontal] wells in a fraction of time that it used to take to drill a vertical well.”

However, the industry must do a better job of using real-time downhole data to optimize the drilling process, she said.

“We’ve done so good on downhole technology and engineering—we’re measuring what’s going on 2 miles below ground in extreme temperatures—but now we need to take that data and optimize it, and that is very much in its infancy,” Taylor said.

At Oil States, Taylor said she has seen a shift from customers investing strictly in engineers to hiring more data scientists. However, overall job growth won’t be significant as the industry will still have to contend with more efficient technologies doing more work, she said.

One challenge that is unique to the oil and gas sector is attracting and retaining workforce, particularly millennials, while fighting the perception of being an anti-environment industry, Taylor said. The solution, she said, might include outsourcing from engineering firms, accepting the future workforce will be different than the past, and focusing on the positive economic impact the industry brings, even if jobs don’t have high appeal.

“It is not the sexiest industry,” she said. “We are a labor-intensive business.”

On the health care side Houston has seen many recent acquisitions and mergers, including Baylor Scott & White and Memorial Herman Health System’s merger in October, and the trend is likely to continue, Villarreal said.

Mergers and acquisitions are an attempt to improve value for consumers at a lower cost while maintaining profitability for hospitals, which is not an easy feat, Villarreal said.

“The industry … is at the crossroads of being very altruistic—the people that get into it want to care of people—but it has to be business minded,” he said. “Houston is really seeing that happen today, we see mergers and acquisitions; ambulatory entities all going bankrupt … and health systems aligning with medical schools.”

Similar to other industries, the health care sector should also look at better ways of optimizing and sharing data, Potter said, especially if custom health tracking chips, embedded in patients, becomes a reality.

In November, HPE donated $10 million to the University of Houston’s Data Science Institute, which will help fund scholarships and equipment to enhance data science research activities, according to a UH press release. The institute focuses on addressing challenges in Houston’s health care and energy sectors, from health data-mining to data-enabled oil and gas exploration, the press release stated.

“[We’re trying] to build the kind of workforce … to take advantage of digitalization we are creating in every industry and to understand how to become more streamlined and more efficient,” Potter said. “It’s a renaissance, if you will, of the region and the different economies being able to come together and leverage that data.”
SHARE THIS STORY