The city of Humble quietly initiated the act of acquiring properties around downtown Humble in 2020 with the purchase of an asbestos-filled home.

Although seemingly random, city officials said the small purchase—and its early February demolition—is just a piece of the puzzle in the city’s long-term plan to revitalize downtown Humble.

So far, the city has spent about $150,000 to acquire property, and it will spend almost $250,000 this year to demolish three properties. The city is also seeking to purchase and demolish another smaller property, but the sale has not been finalized.

The property acquisition is coupled with a push to host more events, demolish underused and worn structures, and incentivize improvements to downtown properties, Humble City Manager Jason Stuebe said. However, the ongoing coronavirus pandemic has temporarily weakened the city’s gusto for redevelopment, he said.

“We laid out a game plan that we just never got off the ground,” he said. “It’s there on the shelf, ... and we’re just waiting for the right time that we can pull it back down.”
RELATED STORIES

• Kiddie Academy of Atascocita now open in The Groves

The idea to redevelop downtown Humble began in 2014 before the city launched its Downtown Improvement Program in April 2015, Stuebe said. The program offers a matching grant incentive up to $10,000 for downtown-area businesses and residents who beautify their properties.

Local resident Arliss Bentley, Humble Beautification Committee member, said via email the city reimbursed 50% of the project cost after she paid to have her front sidewalk replaced and added handrails to her porch steps.

“I loved everything that was done and [was] very happy that the city budgets this for outside improvements of property in Humble,” she said. “We need to show visitors to our city that we care about the appearance of properties in our town.”

Meanwhile, the city held its first workshop in January 2020 to discuss revitalizing downtown. But when lockdowns began in March, many plans for the year ceased, said Mark Mitchell, the chief economic development officer of Partnership Lake Houston.

“The plan was to take City Council to some of these other communities that had done a significantly awesome job of transitioning from kind of sleepy towns to robust downtown hubs ... and say, ‘How did you get to do this? How did you transition? How did you get the developers on board?’” he said.

While some plans fizzled, a monthly farmers market at Schott Park began in the fall; shows resumed at the Charles Bender Performing Arts Center; and Good Oil Days returns in April.

However, others arrived in their wake, and some existing businesses began property improvements. Benny Vancia, general manager at Humble City Cafe, said he finished painting the building’s exterior electric blue and repainted the interior in the fall. He said he believes the cafe’s owner applied to the Downtown Improvement Program to help fund the changes.

“When I talk to a lot of customers, some of them say, ‘I’ve lived in Humble for five years, three years and never knew about this place,’” he said.

So far, Armstrong said he has spent $200,000 on a new roof, electrical and plumbing as well as interior renovations; he said he did not apply for the city’s improvement program. By summer, he will install signage and exterior lights, repair the awning, and power-wash and repaint the building.

“I wanted to fix this thing up nice because there’s always a future in people wanting to getting their hair done,” he said.

To aid in future redevelopment, 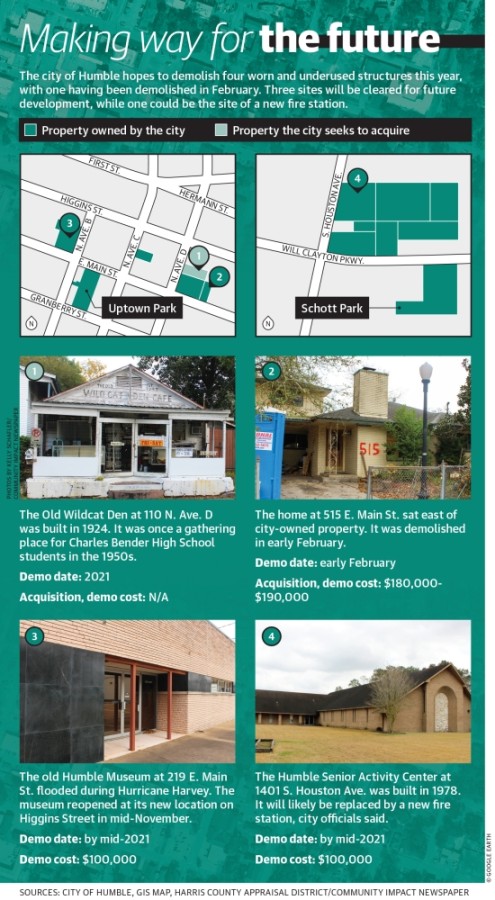 Stuebe said the city plans to demolish and potentially acquire select properties in the downtown area to create space for new development.

“We need to have enough square footage and acreage to where it would be meaningful and impactful for someone to be truly interested in [developing] it,” he said.

The 43-year-old senior activity center on South Houston Avenue, which reportedly has asbestos, will be cleared by mid-2021. The land will likely be the new home of Humble Fire Station No. 2, which could break ground in early 2022.

Similarly, the old Humble Museum flooded during Hurricane Harvey and also has asbestos, officials said. The downtown spot will likely be temporarily used for parking until development can happen, Stuebe said.

The city aims to eventually enter into a public-private partnership with a developer who can transform some of the acquired land, Stuebe said.

In public-private partnerships, Mitchell said an entity offers property, infrastructure or right of way to a developer to assume some development costs. Mitchell said partnerships are often not needed along high-traffic areas, where the land demand is market driven.

“With public-private partnerships, we typically look at distressed areas that are not attractive quite yet to developers,” he said. “The city or community has to know that this is not a prime piece of real estate, otherwise it would have been developed.”

With this in mind, Humble City Council authorized the city to secure contracts for two properties adjoining the city’s lot at 503 E. Main St. in April and December, respectively.

The city spent $150,000 to buy and about $40,000 to demolish the home east of the lot in early February; however, the city is in negotiations for the Old Wildcat Den, an almost 100-year-old structure north of the lot.

“There is potential before us to be a little bit more aggressive in making some offers on some larger pieces of property in downtown that may not be in the best of condition,” he said.

“People could never have to get in their auto and just ... [walk] to restaurants, doughnut shops or to an event center,” he said. “I think that’s what the society today is looking for.”
Humble Downtown Humble Humble revitalization Humble City Cafe Humble Uptown Salon and Med Spa Jason Stuebe Merle Aaron Mark Mitchell Greg Armstrong Benny Vancia Arliss Bentley
SHARE THIS STORY