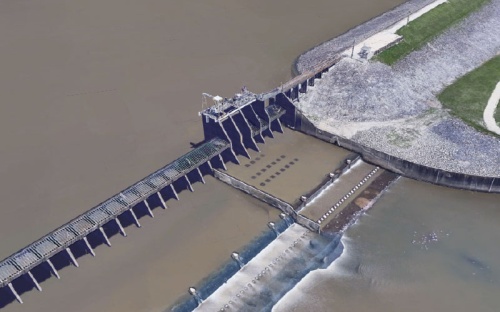 Since Hurricane Harvey, various flood-prevention projects have broken ground in the Lake Houston and Kingwood areas.

Editor's note: This story is Part 1 of a three-part series looking at how Hurricane Harvey continues to affect the Kingwood area two years after the storm.

Update: Since this story appeared in the print edition, the city of Houston has been approved to receive a $47.1 million grant from the Federal Emergency Management Agency to add gates to the Lake Houston dam.

Across the street from the Forest Cove Community Center sits the Riverview Townhomes at Forest Cove: a development that was deemed uninhabitable after Hurricane Harvey hit in August 2017. The abandoned townhomes, which sit near the banks of the West Fork of the San Jacinto River in Kingwood, have been reduced to graffitied walls and foundation shells.

“They’re unsafe structures. They shouldn’t be allowed to be there,” said Joy Sadler, vice president of the Forest Cove Property Owners Association. “Our community’s been left with holding the bag for someone else’s damages, and nobody seems to think they need to do anything.”

Although Houston and Harris County officials have broken ground on numerous multimillion-dollar flood-prevention projects and sought funding for hundreds of home buyouts in the two years since Hurricane Harvey, Sadler said some Lake Houston-area communities, such as Forest Cove, are still recovering.

Harris County Flood Control District officials confirmed that the townhomes are on the district’s list of eligible home buyouts. However, HCFCD Deputy Executive Director Matt Zeve said it is a long, challenging process getting in touch with homeowners who abandoned their battered homes after disasters.

More than 1,100 parcels in the Kingwood area have been identified by the HCFCD as eligible for buyout, and 73 of those have been purchased since Harvey, said James Wade, HCFCD’s property acquisition department manager.

Roughly $280 million has been allocated for home buyouts in Harris County since Harvey—$200 million of it from federal programs and $80 million from Harris County’s $2.5 billion flood infrastructure bond approved by voters in August, Wade said.

For the homes that have repeatedly flooded, Wade said a buyout program from the HCFCD or the Federal Emergency Management Agency is sometimes viewed as their best option. However, sometimes residents choose not to wait for buyouts—as the process can take anywhere from eight to 18 months, Wade said.

“A lot of these folks that I’ve spoken with told me that right after they got their homes completely repaired from the 2016 flood, weeks later, along came Harvey,” Wade said.

Some neighborhoods in the Kingwood area, such as the townhomes near Forest Cove, repeatedly flood due to their location in the flood plain, Zeve said. Harris County entered the National Flood Insurance Program in 1984, and the first flood plain map was not available until 1990—decades after some Harris County homes were built, he said.

“If we knew then what we know now, many of those subdivisions would not have been built,” Zeve said.

To combat future development in the flood plain, Harris County commissioners approved tougher development standards on July 9 for building in flood plains in unincorporated Harris County, based on Atlas-14 rainfall data released in September. Atlas-14, which was conducted by the National Oceanic and Atmospheric Administration, updated Texas’ precipitation frequency estimates.

The regulations require developers to build larger detention ponds and mitigate bringing fill materials in the 500-year flood plain—an area with a 0.2% chance of flooding in a given year—rather than just the 100-year flood plain.

The county is also in the process of remapping flood plains, of which preliminary maps should be released by summer 2022, Zeve said.

As some await buyouts, entities push forward on flood-prevention projects aimed at improving the capacity of tributaries around Lake Houston and studying drainage systems in the region to get water out of the area more quickly.

Zeve said the HCFCD continues to partner with local agencies to study and address causes of flooding in the Greater Houston area. In April, the HCFCD began work on the San Jacinto Regional Watershed Master Drainage Plan, which will identify flood-prevention strategies regionwide.

Additionally, the Army Corps of Engineers Galveston District also continues dredging the West Fork of the San Jacinto River. Houston’s Chief Recovery Officer Steve Costello said he believes dredging the river is one of the more important projects in the Lake Houston area since the storm.

Roughly $87 million has been spent to dredge the river since Harvey, as the Corps started on the second leg of the project in June, according to Corps officials. Costello said the city of Houston is still awaiting a response from the Corps on the city’s permit application to extend the dredging to include 1.4 million cubic yards to restore the mouth bar to pre-Harvey conditions.

Costello said the city of Houston submitted an application to FEMA’s Hazard Mitigation Grant Program, and city officials estimate it will be approved in late July or early August, after press time. Once approved, it will take roughly 12 months to design the project and 26 months to construct. Costello said the city aims to complete the project by fourth quarter 2021.

Houston City Council Member Dave Martin said while the dredging project will get the area back to pre-Harvey conditions, the gates will help prevent future flooding.

“I can’t say we’ll never flood again, but we’re doing everything possible to make sure that if we receive a hurricane or just a great amount of rain, we’ll have the ability ... to release water [from the dam] in a rapid fashion,” he said.

In the 86th Texas legislative session this year, lawmakers also fought for funding to help rebuild and protect areas affected by Harvey, including in the Kingwood area. State Sen. Brandon Creighton, R-Conroe, who authored Senate Bill 7, said dredging efforts and modifications to the dam gates are two Lake Houston-area projects that could potentially benefit from the funding mechanisms established by SB 7, which Texas Gov. Greg Abbott signed into law in June.

Creighton said $1.7 billion will be available across four different accounts, all of which could be applied to projects specific to the Lake Houston area. One account establishes a Corps division that will work with local government agencies to set up future projects, and another is dedicated to revising flood plain maps.

More than $600 million of these funds will be disbursed to local governments across the 60-county disaster area to help secure matching funds, Creighton said. While this level of state involvement in disaster relief is uncommon, he said the reaction to an unprecedented storm will leave Texas in a better position for future disasters.

State agencies are now tasked with establishing a framework for obtaining the money. The Texas Infrastructure Resiliency Fund, which is meant to provide shorter-term funding for current projects, needs to be developed through the Texas Water Development Board, Creighton said.

“This isn’t a path forward for what we’re always going to be able to do on the local-match side, but for the preparation side, the flood mitigation side … and the planning sequence, we’re going to be better prepared,” he said.

Read other stories from the three-part series: Recovery in retail and Healing from Harvey.

Correction: The original version of this article incorrectly gave Matt Zeve the title of executive director with the Harris County Flood Control District. The article has been updated to reflect the correct title.