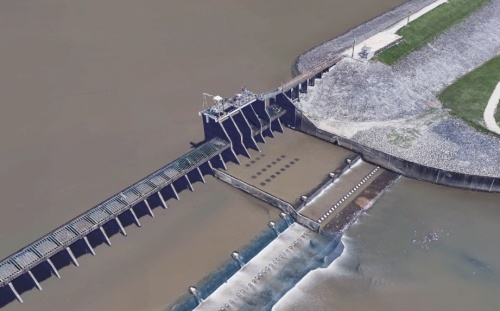 The Lake Houston dam is shown in a Google Earth Pro aerial photo.

The project will convert the Lake Houston spillway into 10 dam gates, which will allow water to be released from the dam in the case of severe weather events. In an interview prior to the city of Houston receiving federal funding, Martin said the Lake Houston dam project was one of the more important flood-mitigation projects that has been pursued since Hurricane Harvey hit the Kingwood area in August 2017.

“I can’t say we’ll never flood again, but we’re doing everything possible to make sure that if we receive a hurricane or just a great amount of rain, we’ll have the ability ... to release water [from the dam] in a rapid fashion,” Martin said.

The Lake Houston dam project will be completed in two phases: an engineering and design phase and a construction phase, according to the release.

It will take roughly 12 months to design the project and 26 months to construct the 10 additional gates, according to city of Houston officials. The project is estimated to begin in late 2020 and be completed in the fourth quarter of 2021, officials said.

Additionally, U.S. Rep. Dan Crenshaw, R-Houston, also released a statement Aug. 2 to thank local officials and lawmakers for working together to gain funding for the project.

“This is great news for the entire San Jacinto watershed," Crenshaw stated in the release. "This money will fund the much-needed Lake Houston dam gates to better manage the flow of water. For a community that feels the burden of flooding too often, this is a huge win."

In addition to the funding for the Lake Houston dam, another Lake Houston-area project was also approved to receive funding from FEMA's Hazard Mitigation Grant Program. Lone Star College-Kingwood was awarded two grants for emergency protective measures totaling more than $8.7 million, according to a news release.
SHARE THIS STORY